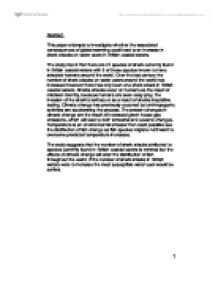 This paper attempts to investigate whether the associated consequences of global warming could lead to an increase in shark attacks on water users in British coastal waters.

Abstract. This paper attempts to investigate whether the associated consequences of global warming could lead to an increase in shark attacks on water users in British coastal waters. The study found that there are 21 species of shark currently found in British coastal waters with 5 of these species known to have attacked humans around the world. Over the last century the number of shark attacks on water users around the world has increased however there has only been one shark attack in British coastal waters. Sharks attacks occur on humans as the result of mistaken identity, because humans are seen easy prey, the invasion of the shark's territory or as a result of sharks inquisitive testing. Climate change has previously occurred but anthropogenic activities are accelerating the process. The present changes in climate change are the result of increased green house gas emissions, which will lead to both terrestrial and oceanic changes. Temperature is an environmental stressor that could possible see the distribution of fish change as fish species migrate northward to overcome predicted temperature increases. The study suggests that the number of shark attacks attributed to species currently found in British coastal waters is minimal but the effects of climate change will alter the distribution of fish throughout the world. If the number of shark attacks in British waters were to increase the most susceptible water user would be surfers. 1.0 Introduction. The coverage of global events has increased with developments in technology and this has lead to such events becoming more accessible through various types of media. Whether it is television, radio, newspapers, magazine articles or the Internet. Noticeably the number of shark attacks, in particular those captured using home video recording equipment and shown on the global media networks have become more regular. Two examples being the most prominent, the first in 1998 in the Adriatic Sea, when a White shark ate a Father and Son's fishing catch as it was reeled alongside their fishing boat. ...read more.

It is believed that legislation protecting sea lion colonies was the cause of the increased attacks (Steel 1989). 75% of great white attacks are non-fatal, this would suggest that the mistaken identity theory is valid. This theory has been attributed to sharks disliking the taste of human flesh or wetsuit material, neoprene. Larger sharks such as the Great white and Tiger sharks usual prey, aquatic mammals have a higher fat content than humans and therefore sharks may leave human attack victims as they wish to conserve energy. 3.4.2 Easy Prey. The Mako shark can reach speeds of up to 50 Km/hr (www.sharkattack.com). Because humans natural habitat is not water, their movement and sensory ability is not particularly well adapted to the sea, making them particularly susceptible to shark attacks. Great white attacks around the world are usually hit and run and human prey is rarely eaten. However the Mediterranean Great Whites that have been caught and had an autopsy performed on them have contained the highest proportion of fully ingested human corpses compared to the rest of the world. (Jaws in the Med) This is likely to be the result of increased pollution killing their natural prey. An example comes from the Tuna fishermen of Favigiana who have seen their Tuna catch numbers reduced over the decades as a result of pollution and over fishing. Mediterranean Great whites have been noted by the fishermen attacking tuna as they swim in to the nets. (Jaws in the Med). 3.4.3 Inquisitive testing. Sharks are believed to test objects by biting them. Therefore the theory of sharks taking a single bite 'hit and run' could simply be as a result of the inquisitive nature of sharks. (http://mote.org/~rhueter /sharks/shark/.phtml 2002). 3.4.4 Territorial Invasion Many terrestrial animals show behavioural patterns that include defending territory. It is believed that shark attacks could be the result of human invasion of territory (Steel 1989) ...read more.

It is now illegal for fishermen in Britain to shoot Grey seals, as they are a protected species. There is now the opportunity for larger sharks that feed on seals to find a food source around Britain as seal numbers are expected to increase (www.bbc.co.uk 2002). This could in turn lead to more shark attacks, particularly on surfers as a result of mistaken identity. 8.0 Conclusion. There has been only one shark attack in the UK and of the 21 species that can be found in British coastal waters only four have been attributed to thirty five unprovoked attacks, five of which where fatal, around the world. This is a very small number considering that there are between 50 and 75 attacks worldwide every year. The majority of these attacks are assigned to species of which there is no evidence to suggest they visit or inhabit British coastal waters. The green house effect has been exaggerated as a result of anthropogenic activity. The consequences of this will probably affect the world's climate. The prediction of a rise between 1�c and 4 �c over the next one hundred years will have a profound effect on the distribution of fish. As sea temperatures rise fish species will migrate northwards to overcome, increased environmental stress. While temperature alone is not the only factor that will lead to migration, when coupled with other stressors such as pollution there may be a more significant impact. The rise in sea temperature could result in native species becoming more active and species that do not inhabit British coastal waters finding more suitable environments in this area. The most significant factor that is likely to increase the number of attacks is the increasing population of seals. This is a staple food source for larger shark species that attack humans on a more regular basis. It is evident that if the number of shark species where to increase within British Coastal Waters the most susceptible group of recreational water users would be 'surfers'. ...read more.