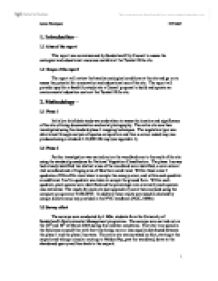 This report was commissioned by Sunderland City Council to assess the ecological and educational resources available at the Tunstall Hills site.

1. Introduction - 1.1 Aims of the report This report was commissioned by Sunderland City Council to assess the ecological and educational resources available at the Tunstall Hills site. 1.2 Scope of the report The report will review the baseline ecological conditions at the site and go on to assess the potential for conservation and educational use of the site. The report will provide input for a feasibility study into a Council proposal to build and operate an environmental education centre at the Tunstall Hills site. 2. Methodology - 2.1 Phase 1 Initially a brief desk study was undertaken to assess the location and significance of the site utilising documentation and aerial photography. The entire site was then investigated using the standard phase 1 mapping techniques. The vegetation type was determined through analysis of species composition and then a colour coded map was produced using a standard 1:10,000 OS map (see appendix 1). 2.2 Phase 2 Further investigation was carried out on the woodland area to the south of the site using the standard procedures for National Vegetation Classification. The phase 1 survey had already identified two distinct areas of the woodland were identified, a semi-natural Ash woodland and a fringing area of Hawthorn scrub land. Within these areas 5 quadrates of 20m?20m were taken to sample the canopy cover, and within each quadrate an additional 5m?5m quadrate was taken to sample the ground flora. Within each quadrate, plant species were identified and the percentage area covered by each species was estimated. The results for each site (see appendix 2) ...read more.

In addition there is already an extensive footpath network present. The only drawback in this area is the severity of the slope, which provides a potential hazard to young children. The site has potentially massive educational potential due to its semi-urban location, which makes it accessible to a large amount of schools. It is useful because the size of the site and the topography increase the perceived carrying capacity, which enables it to be used by multiple groups simultaneously. 4.2 Ecological Value The ecological value of the site lies almost entirely in the unimproved and semi-improved grassland areas and the communities they support. In order to gain a full appreciation of the conservation interest at Tunstall Hills it is essential that the grassland areas are resurveyed at an appropriate time of year. Only when armed with more data about the species richness can a full assessment of the ecology of the site be made. For the purposes of this report some attempt has been made to gauge the value of the site ecologically. However it is acknowledged from the outset that this approach is not fully objective. In order to minimise subjectivity the 'Ratcliffe criteria' shall be used to assess the ecological value of the site. This approach is consistent with that recommended by the Institute of Ecology and Environmental Management (Regini, 2000). 4.2.1 Size With an area of just under 16 ha. the site would appear to be quite limited in areal extent. However when it is considered that the total national resource for Magnesian limestone grassland is only 270 ha. ...read more.

Due to the high prevalence of CHD in the region as a whole, the importance of informal recreation for health should be given serious consideration. Recreational use of the site also provides massive social benefits to a deprived area. 5. Conclusions - The Tunstall Hills site is a grassland area of unique geological interest, which is currently preserved through SSSI status. However phase 1 habitat surveys of the site have identified many areas of outstanding ecological value. In particular the unimproved grassland areas which contain nationally rare plant species. The site has been identified as especially vulnerable due to the lack of connectivity to other sites and the huge pressures on the site for recreational use. Clearly the Tunstall Hills site is simultaneously providing massive benefits to the community in terms of recreation but there is potential to improve this further. Rather than impinge on recreation conservation and education at the site could actually improve the appreciation that most people derive form the site. With appropriate management the site uses need not conflict but can actually complement each other e.g. nature interpretation increasing the satisfaction of a walk for ramblers. 6. References - Blake, C. (1989) Handbook for phase 1 habitat survey - a technique for environmental audit, Nature Conservancy Council English Nature (1995) Tunstall Hills and Ryhope Cutting Management Statement, Sunderland City Council Hedley, S. Clifton, S. and Mullinger, S (1997) The Durham Magnesian Limestone, English Nature Northumbria Team, No. 6 Nature Conservancy Council (1989a) Information on selected woodlands W8, W21, ENVM45 Resources Pack, University of Sunderland Nature Conservancy Council (1989b) Guidelines for the selection of biological SSSI's, ENVM45 Resources Pack, University of Sunderland Regini, K. (2000) Guidelines for ecological evaluation and impact assessment, Ecology and Environmental Management in practice, 29 Treweek, J. ...read more.