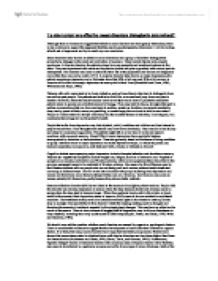 To what extent are affective mood disorders biologically determined?

To what extent are affective mood disorders biologically determined? Although there is evidence to suggest that affective mood disorders are biologically determined, there is also evidence to support the argument that they can be psychologically determined. I will be looking at both sets of arguments and try to reach my own conclusion. Mood disorders (also known as affective mood disorders) are a group of disorders distinguished primarily by changes in the mood and motivation of a person. These include bipolar and unipolar syndromes. In bipolar disorder, the patient swings from one energetic and emotional extreme to the other. They can experience both mania and depression (which are polar opposites) with normal periods interspersed. This disorder can occur in about 0.5% to 1% of the population and women are diagnosed more often than men are by a ratio of 3:2. In unipolar disorder (also known as major depression), the patient experiences depression only. Estimates show that 10% of all men and 20% of all women in America will suffer from major depression at some point in their lives (Hirschfeld and Cross, 1981; Weissman and Boyd, 1985). Patients with mild mania tend to be lively, talkative, and self-confident, often hard to distinguish from normal buoyant people. The patients are unable to sit still for a moment and jump from one plan to another. However, when the mania becomes more severe (known as acute or psychotic mania) the patient seems to possess an unlimited amount of energy. ...read more.

Studies have also shown that patients suffering from one of the disorders (bipolar or unipolar) tend to have relatives with the same disorder but not the other. This suggests that there are separate inheritance pathways for each and makes it likely that they are largely separate disorders (Gershon, Nurnberger, Berrettini, and Goldin, 1985; Torgersen, 1986; Wender, Kety, Rosenthal, Schulsinger, and Ortmann, 1986). There are strong arguments that biological factors trigger mood disorders, especially bipolar ones. The fact that people suffering from bipolar disorders tend to switch from one extreme mood to another supports this argument. There must be some internal biological switch that triggers this. Some investigations say that the switch is due to instable neuronal membranes (Hirschfeld and Goodwin, 1988; Meltzer, 1986). This may also explain why some medications are successful in controlling these mood swings. Other hypothesise propose that when important neurotransmitters such as norepinephrine and/or serotonin are in short supply at certain critical sites in the brain, the person becomes depressed. The evidence used to arrive at these conclusions comes from the analysis of the products formed from the metabolic breakdown of these substances. If the levels of these products in the spinal fluid or urine are low then there must have been a low supply of the corresponding neurotransmitters. In addition, analysis also showed that the amount of norepinephrine in the brain increased when the patient became manic (Muscettola, Potter, Pickar, and Goodwin, 1984; Schildkraut, Green, and Mooney, 1985). ...read more.

Women are diagnosed more than men are by a ratio of 3:2. A biological cause of this might be that there are predisposing genes on the X chromosome (as explained earlier) and this leads to women suffering more from depression than men do. In addition, women endure cyclic hormonal changes, such as drops in the levels of estrogen and progesterone during premenstrual periods, which can lead to depression. There are also some behavioural explanations as to why there is a difference. Men who are depressed may try to suppress it by distracting themselves with physical activities or alcohol. Women, however, may try find out why they are depressed and cry to relieve tension. Women also tend to seek help more than men do and this may explain why more women are diagnosed with depression than men are. After looking at all the evidence and both sets of view, I am unable to draw to a conclusive answer as to whether mood disorders are biologically determined. However, I believe that the organic explanations, in my view, are far more convincing than the psychogenic explanations. It seems that the levels of norepinephrine and/or serotonin affect the mood of the person and antidepressant medications relieve depression. This suggests that depression and mania are biologically determined. With regard to gender differences, I believe that women tend to be diagnosed more than men due to cultural differences i.e. women tend more often to seek help and therefore are diagnosed more. In conclusion, no current theories have been proved as of yet and I have an open mind as to any other explanations that may cause depression or mania. ...read more.