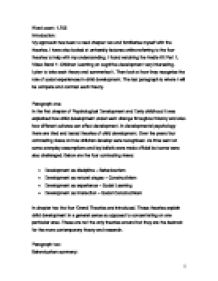 To what extent do the grand theories discussed in Book 1, Chapter 2 take account of the role of social experiences in child development?

Word count: 1,705 Introduction: My approach has been to read chapter two and familiarise myself with the theories. I have also looked at university lectures online referring to the four theories to help with my understanding. I found watching the Media Kit Part 1, Video Band 1: Children Learning on cognitive development very interesting. I plan to take each theory and summarise it. Then look at how they recognise the role of social experiences in child development. The last paragraph is where I will be compare and contrast each theory. Paragraph one: In the first chapter of Psychological Development and Early childhood it was explained how child development under went change throughout history and also how different cultures can affect development. In developmental psychology there are tried and tested theories of child development. Over the years four contrasting views on how children develop were recognised. As time went on some everyday assumptions and lay beliefs were made official but some were also challenged. Below are the four contrasting views: * Development as discipline - Behaviourism * Development as natural stages - Constructivism * Development as experience - Social Learning * Development as interaction - Social Constructivism In chapter two the four 'Grand Theories are introduced. These theories explain child development in a general sense as opposed to concentrating on one particular area. ...read more.

The teacher demonstrates the operations of the textile machine, while the girl simply observes, then when the girl feels ready she takes over and she usually operates it skilfully on her very first try' (Crain, 2000, p194). Even though the girl is only watching there is still a social experience taking place. This theory takes more of an account of social experiences in child development than behaviourism because to learn through observation the child needs to be in social situations more often not. Constructivism: Psychologist: Jean Piaget (Swiss, 1896-1980) 'Piaget's work was called genetic epistemology which is his term for the study of the origins and development of knowledge,' (Psychological Development and Early Childhood Chapter 2 p.63). He believed not only did the environment play a big part in child development but also the innate qualities that the child is born with. He put forward the idea that children develop through a sequence of stages. There was a certain order to these stages and a child's development could not move until the one before was mastered. Stage one Sensory motor stage (from birth to two years) Stage two Pre operational stage (From two to six years) Stage three Concrete operation stage (from six years to twelve years) Stage four Formal operations stage (from twelve onwards) ...read more.

Piaget claimed that children five to six years old could not understand conservation and this was shown in the Video Band 1 in the experiment of conservation of mass. Although Donaldson (1978) argued that if the experiments make sense to the child the result was they could understand it. As a result of Piaget's thoughts around cognitive development an approach known as 'discovery learning' was developed. This means that the adult is there to provide an appropriate learning environment as opposed to being involved in actual teaching. Conclusion The extent to which each theory takes account of the role of social experiences in child development is quite different. In behaviourism and social learning it is clear the influences from the outside are concentrated on. Although there is evidence that social experiences take place throughout some experiments carried out e.g. 'Little Albert' (Watson 1924) and 'Guatemalan Girls learning to weave' (Crain, 2000, p.194) there is no account taken of it. Again with Constructivism there is evidence of social experiences but no account taken of it. For example, Piaget's theory tells us that the child constructs his own world but in order to do this the child would have to be in social situations to learn. Social constructivism sees the child as an extremely social being and through contact with more experienced people; children discover new ways of behaving and thinking. ...read more.