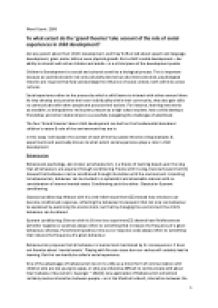 To what extent do the grand theories take account of the role of social experiences in child development?

﻿Word Count: 1998 To what extent do the ?grand theories? take account of the role of social experiences in child development? Ask any parent about their child?s development, and they?ll often talk about speech and language development, gross motor skills or even physical growth. But a child?s social development?her ability to interact with other children and adults?is a critical piece of the development puzzle. Children?s Development is a social and cultural as well as a biological process. This is important because as societies become not only culturally diverse but also interconnected, psychological theories are required that fully acknowledge the influence of social context, both within & across cultures. Social experience refers to the process by which a child learns to interact with others around them. As they develop and perceive their own individuality within their community, they also gain skills to communicate with other people and process their actions. For instance, learning new words as a toddler, to being able to resist peer pressure as a high school student, how a child develops friendships and other relationships to successfully navigating the challenges of adulthood. The four ?Grand theories? about child development are built on the fundamental idea about children?s nature & role of the environment they are in. In this essay I will explain the context of each of the four grand theories citing examples & experiments and eventually discuss to what extent social experience plays a role in child development. ...read more.

Stage1: Sensori-motor stage: birth to 2 years: simple motor responses Stage2: Pre-operational stage: 2 ? 6 years: language development & egocentrism. Stage3: Concrete operations stage: 6 ? 12 years: mental operations. Stage4: Formal operations stage: above 12 years: logical thought Piaget investigated children?s cognitive development by administering sets of experimental tasks & children?s performance on these tasks reflected their stage of development. These tasks have come to be seen as classic experiments in developmental psychology. One of the concepts Piaget suggested was absolute from pre-operational stage children?s representation of the world is conservation of mass, volume, area, length and numbers; the understanding that the quantity would remain same even if the manner of it representation changes. Referring to Media kit video 1, older children 7+ years of age understood the conservation of mass whereas younger children 5-6 years of age did not. This implies that the older children are in the concrete operational stage of development. In Piagetian theory, pre-operational children lack the ability to reflect on operations. Their understanding of the world tends to focus on states rather than on transformation. This is seen in their performance of conservation tasks. Similarly such children are unable to comprehend points of view different from their own. Piaget devised an experiment to explore such egocentrism in children. Referring to Media kit video 1[5], the Three Mountains experiment shows how younger children below years of age cannot make judgements beyond their own viewpoint, whereas ...read more.