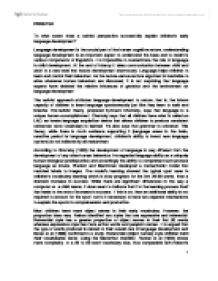 To what extent does a nativist perspective successfully explain childrens early language development?

To what extent does a nativist perspective successfully explain children's early language development? Language development is the crucial part of the human cognitive nature, understanding language development is an important aspect to understand the base and to recall its various components of linguistics. It is impossible to overestimate the role of language in child development. At the end of infancy it takes communication between child and adult to a new level that boosts development enormously. Language helps children to learn and control their behaviour. As the nature-versus-nurture argument is inevitable to arise whenever human behaviors are discussed, it is not surprising that language experts have debated the relative influences of genetics and the environment on language development The nativist approach attributes language development to nature, that is, the inborn capacity of children to learn language spontaneously just like they learn to walk and breathe. The nativist theory, proposed by Noam Chomsky, says that language is a unique human accomplishment. Chomsky says that all children have what is called an LAD, an innate language acquisition device that allows children to produce consistent sentences once vocabulary is learned. He also says that grammar is universal. This theory, while there is much evidence supporting it (language areas in the brain, sensitive period for language development, children's ability to invent new language systems) is not believed by all researchers. According to Chomsky (1965) the development of language is very different from the development of any other human behaviour. ...read more.

These differences present children who are learning their first language with a problem. Theorists have offered two types of solutions; First solution is Empiricist; children have to work out the significance of morphology & syntax based on experience. For example; Mary chases John or John chases Mary. Here there is good reason to suppose that syntax cues. On the other hand; Mary-da chases John or Mary chases John-da. Here there is good reason to suppose that morphology cues are important in the language. The alternative solution is Nativist is that they already "know" languages can be syntactically or morphologically oriented, that is, they are born with an implicit understanding. Chomsky's universal grammar concept is necessary because children aren't presented with coherent examples from which to 'learn.' Children produce first words sometime after 12 months. They are simple like mama, daddy, cup, drink, no, more, and relate to their environment. Single word conversations have surprising utility, when connected with gestures, intonation, facial expressions, gaze, and direction. The transition from early child-like word combination to a full blown grammar is rapid. By the time children are 4years old, most children are very competent. They can ask questions, make statements and issue commands. (Brown, longitudinal study of Adam provides evidence). Brown and Hanlon argue they assimilate the main structures of their native language without explicit instruction or correction. There was a disagreement as to how the processes of memorization ad inflection operate to produce the U-shaped pattern of development that is observed in English-speaking children. ...read more.

They therefore have the grammar correct and it is just the word meaning they have got wrong. It is an approach entirely compatible with an innate universal grammar. Nativists believe that all children are born with the ability to speak any language. In conclusion, language development is a complicated process and there are many different views on this issue. Universal Grammar and Dual Route theory suggest innate capabilities (Chomsky, Pinker). Single Route theories and distributional accounts of syntax suggest empiricist explanations. Balance of evidence favors empiricist accounts like single route is more credible explanation across different languages; distributional accounts have support of evidence from the modeling studies. This theory is consistent with observational accounts of children's learning. However, it is not the case that there may not be any innate abilities with respect to the language. Broad theoretical agreement exists that humans have specialized machinery that permits language acquisition. More recent discussions are concerned with understanding the skills that a child brings to learning languages and if they are related to a specific language or are a more general cognitive ability. Both universal grammar and grammar extraction from the environment are still being considered as possibilities. Methods are improving and changing constantly for example from diary studies to experimental studies to connectionist modeling. Some aspects of each of the theories make perfect sense. Other theories are tilted too much and emphasize on one single factor as to how language is acquired. Unlike the nativist, or cognitive theorists, I believe that both biological and environmental factors are important. Word count: 1850 aprox. ...read more.