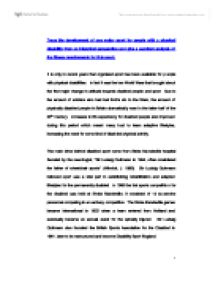 Trace the development of one major sport for people with a physical disability from an historical perspective and give a succinct analysis of the fitness requirements for this sport.

Trace the development of one major sport for people with a physical disability from an historical perspective and give a succinct analysis of the fitness requirements for this sport. It is only in recent years that organised sport has been available for people with physical disabilities. In fact it was the two World Wars that brought about the first major change in attitude towards disabled people and sport. Due to the amount of soldiers who had lost limb's etc in the Wars, the amount of physically disabled people in Britain dramatically rose in the latter half of the 20th Century. Increases in life expectancy for disabled people also improved during this period which meant many had to learn adaptive lifestyles, increasing the need for some kind of disabled physical activity. The main drive behind disabled sport came from Stoke Mandeville hospital founded by the neurologist, "Sir Ludwig Guttmann in 1944, often considered the father of wheelchair sports" (Winnick, J. 1990). Sir Ludwig Guttmann believed sport was a vital part in establishing rehabilitation and adapted lifestyles for the permanently disabled. In 1948 the first sports competition for the disabled was held at Stoke Mandeville, it consisted of 14 ex-service personnel competing in an archery competition. The Stoke Mandeville games became international in 1952 when a team entered from Holland and eventually became an annual event for the spinally injured. ...read more.

Wheelchair Rugby is now believed to be one of the fastest growing wheelchair sports in the world, with World Championships held every four years by the International Wheelchair Rugby Federation (IWRF). There are now over twenty international teams worldwide from as far away as Australia and, on top of this, many countries also have a whole host of club and regional teams. America alone has over forty five Quad Rugby Clubs with many in development. This is a further sign of just how much the sport has progressed since its invention in the mid 1970's. Athletes may have various disabilities which prohibit their participation in able-bodied sports. To become eligible to play Quad Rugby players must have a combination of upper and lower extremity impairment , most of the Quad Rugby players have sustained cervical level spinal injuries and have thus some type of quadriplegia as a result. However, Quad Rugby players could include those whose disability is the result of Polio, Cerebral Palsy or even progressive diseases like Multiple Sclerosis or Muscular Dystrophy. Competitors in Quad Rugby are given a classification grade from one of seven classifications ranging from 0.5 - 3.5. Players graded 0.5 are the competitors with the greatest impairment and are comparable to a C5 quadriplegic. Those with higher grades around the 3.5 mark have the least impairment and are similar to C7-8 incomplete quadriplegic. ...read more.

The training of wheelchair athletes is thus in keeping with that undertaken by able-bodied players. Anaerobic and aerobic training of quadriplegics and high level paraplegics can lead to an increase in performance, however, due to decreased amounts of muscle mass these athletes tire more quickly than lower level paraplegics or able-bodied athletes. Consequently, when training with paraplegics anaerobic training should be used. On the whole training for Quad Rugby player's shadows that used by their able-bodied peers and is designed to work on the fitness requirements needed for the sport. All forms of training help psychologically and thus improvements in performance inevitably go up. From the increase in performance level players will gain increased confidence, self efficacy and motivation, just like their able-bodied counterparts. Overall the development of Quad Rugby (Wheelchair Rugby) has been extremely quick since its invention in the mid 1970's. It has become very popular in modern times and is generally considered the fastest growing sport for wheelchair users. It is predicted that its popularity will continue to grow due to the success of able-bodied Rugby. This view is held by Pawel Zbieranowski, President of the IWRF, "There is no doubt that Wheelchair Rugby is enjoying a spin-off of interest based on the able-bodied sport of Rugby". In terms of fitness requirements for Quad Rugby, they are similar to those needed for able-bodied Rugby and training for the sport reflects that. ...read more.