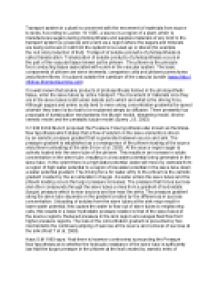 Translocation of soluble products of photosynthesis occurs in the part of the vascular tissue known as the phloem.

﻿Transport system in a plant is concerned with the movement of materials from source to sinks. According to Lacher .W 1985, a source is a region of a plant, which is manufactures sugars during photosynthesis and supplies materials of any kind to the transport system (e.g leaves) and a sink as a region where the sugars and minerals are being removed or lost from the system to be used up or stored (for example the root and production of fruit). Transport of soluble products of photosynthesis is called translocation. Translocation of soluble products of photosynthesis occurs in the part of the vascular tissue known as the phloem. The phloem is the principle food conducting tissue associated with xylem in the vascular system. ...read more.

Reduced pressure in the sink region encourages fluid flow from higher pressure regions. The loss of the concentration gradient is prevented by two mechanisms the continual pumping of sucrose at the source and removal of sucrose at the sink (Rost.T et al; 2006). Hays S.M 1993 says; ?that there is however controversy surrounding the Pressure flow hypothesis as to whether the hydraulic resistance of the sieve tube is sufficiently low that the turgor pressure in the phloem at the leaf created by osmotic entry of water there, can by itself drive translocation at the observed velocities. Water may be expected to exchange between the xylem and phloem of a vascular bundle all along its length, so that there will be at every point a local balancing between xylem and phloem water potentials. The continual water balancing between xylem and phloem will be taking place always. ...read more.