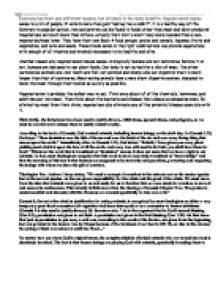 Vegetarianism is a groing trend right now with more and more people choosing it as their diet. Why?

Vegetarianism is a groing trend right now with more and more people choosing it as their diet. Why? Everyone has their own different reasons, but all share in the many benefits. Vegetarianism makes sense to a lot of people. It entails more than just "eating like a rabbit", it is a healthy way of life. Contrary to popular opinion, iron and protien can be found in foods other than meat and dairy products! Vegetarians eat much more than lettuce, actually their diet is most likely more rounded than a non-vegetarian/meat lover. They have their own Basic 4 food groups: grains and cereals, legumes, fruits and vegetables, and nuts and seeds. These foods eaten in the right combinations can provide vegetarians with enough of all vitamins and minerals necessary to be healthy and alive. Another reason why vegetarianism makes sense--biologically humans are not carnivores. Believe it or not, humans are designed to eat plant foods. Our body is not suited for a diet of meat, like other carnivorous animals are. Our teeth are flat, not pointed and sharp; also our digestive tract is much longer than that of carnivores. Meat-eating animals have a very short digestive system, designed to move the meat through their bodies as quickly as possible. Vegetarianism is probaby the safest way to eat. Think once about all of the chemicals, hormones, and additives put into meat. Then think about the bacteria and disease that always accompanies meat. By eliminating meat from their diets, vegetarians also eliminate any of the potential disease associate with it. Historically, the Scriptures have been used to justify slavery, child abuse, spousal abuse, and polygamy, so we must be careful not to misuse them to justify animal cruelty. According to the book of Genesis, God created animals, including human beings, on the sixth day. In Genesis 1:28, God says: "Have dominion over the fish of the sea and over the birds of the air and over every living thing that moves upon the earth." ...read more.

The pancreas is responsible of producing the enzyme for the protein digestion and counteracts the beginning of cancer. A lot of protein is contained in all kinds of nuts, grain and soybean flour. Fat is available in vegetable oil (for instance margarine).Mineral nutrients are contained sufficiently in vegetable food too. Calcium is available in tofu four times more than in cow milk and can also be found in nuts or dried fruits. Vitamin A, B1, B2, C, E and K are contained in fruits and vegetables (spinach, carrots), sometimes also in grain more than sufficient. Our body can produce vitamin D itself under the influence of sunlight, but is also available in enriched foods like margarine. The supply with vitamin B12 could cause some troubles. But the body only needs very few amounts of it and is capable of storing it for a long period of time. Bacteria in the small intestine can produce it too. The natural source are microorganisms, though they get killed by the chemical agriculture. That is why fruits and vegetables coming from organic farming should be preferred. Even a lack of iodine does not have to be feared in this times due to the increasing use of salt containing iodine. An example shall summarize it all: Compared with 100 gram of pork meat soybean flour contains 25 gram more carbohydrates (pork meat has only traces), the same amount of fat, twice as much protein, a bit more calories, five times more mineral nutrients, 15 milligram more vitamin A (pork meat has only traces), a bit more vitamin B1 and twice as much vitamin B2. Besides prove the millions of living vegetarians the opposite every day and it is scientifically proved that they have a longer life expectation. Also consider that with the feed of wheat and grain to livestock about 90% of protein, almost all carbohydrates and all fiber are wasted. ...read more.

Life for animals even before they are slaughtered is often full of suffering. On factory farms, animals are crammed into the small cages and are forced to live in their own excrement. Some believe that conditions for animals on farms should be improved but that it is still acceptable to eat them. That is similar to saying that if one treats you well for a period of time, then he/she should have the right to kill you. Clearly, proper treatment of animals is good but does not justify their killing. The practice of vegetarianism allows animals to live without forced suffering. To live out the Buddhist principle of non-harming, one should adopt a strict vegetarian diet. Last, many Buddhist jataka tales present anthropomorphic views of animals and reveal principles of vegetarianism. For example, in a tale called "The Banyan Deer," a deer converts a king, who is a steadfast hunter, to the belief that all sentient beings should be free from being hunted. After admitting that all sentient beings should be free from being hunted, the king lives happily ever after caring compassionately for all living things. Tales such as this one tell that Buddhists who respect sentient life will gain peace and understanding. They reveal that all life is interconnected and that the suffering of humans is linked to the suffering of all non-human animals. Buddhist jataka tales seem to directly point to the importance of a vegetarian diet. As the above paragraphs show, one who follows Buddhist principles should adopt a strict vegetarian diet. One can see that humans are not natural meat-eaters, that animals are sentient and therefore feel pleasure and pain, and that a vegetarian diet is healthy. Further, Buddhism promotes vegetarianism in mindfulness trainings, through the non-harming principle and in jataka tales. As His Holiness the XIV Dalai Lama stated, "I do not see any reason why animals should be slaughtered to serve as human diet when there are so many substitutes." (qtd. in Famous, par. 5). Clearly, a true Buddhist diet is one that is compassionate and reduces suffering. This diet is undoubtedly strict vegetarian. ...read more.