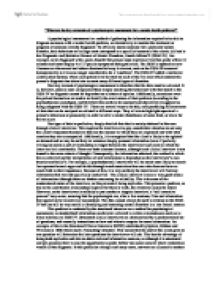 What are the key elements of a psychological assessment for a mental health problem?&quot;

“What are the key elements of a psychological assessment for a mental health problem?”

A psychological assessment is a method of gathering the information required to be able to diagnose someone with a mental health problem, or alternatively to monitor the treatment or progress of someone already diagnosed. To officially assess someone for a particular mental disorder, their behaviour or feelings must correspond to a specified amount of the criteria laid out in the Diagnostic and Statistical Manual of Mental Disorders, Fourth Edition™ (DSM-IV). For example, to be diagnosed with a panic disorder the person must experience fear that peaks within 10 minutes and must display 4 of 13 precise symptoms during this time. The DSM is updated as new illnesses are discovered and others dismissed to keep it relevant, such as the DSM-III removed homosexuality as it was no longer considered to be a ‘condition’. The DSM-IV added a mulitaxial classification system, where each patient is to be rated on each of the five axes which ensures the person’s diagnosis has taken into account many different types of disorders.

One key element of psychological assessment is therefore that the data must be collected. It is, however, usually more complicated than simply matching the behaviour with that stated in the DSM-IV as diagnosis cannot be dependant on a matter of opinion. Additionally, sometimes even the patient themselves are unable to identify the exact nature of their problem (according to the psychodynamic paradigm), and therefore this needs to be assessed and objectively recognised as being congruent with the DSM-IV.  There are several ways to do this, each producing different sorts of data that can be analysed or collated in different ways. They all aim to highlight aspects of a person’s behaviour or personality in order to infer a mental disturbance of some kind, or allow for this to occur.

One type of data is qualitative, deeply detailed data that is mainly obtained in this area through clinical interviews. This requires the interviewer to pay considerable attention to not only the client’s responses themselves but also the manner in which they are expressed and with what emotion they are accompanied. Additionally, it is recognised that the client is likely to be agitated or stressed and so may be unlikely to volunteer deeply personal information (even if perfectly willing to) unless a sort of relationship is forged between the interviewer and client in which the latter can feel comfortable. These are both common features, although each clinical interview is not bound to the same school of thought. Consequently, the information obtained, the method in which this is achieved and the interpretation of said information is dependant on the interviewer’s own theories and belief’s. For example, a psychodynamic interviewer will be much more likely to search for repressed sexual urges and do this through word association than one who does not have as much faith in their importance. Because of this, it is very unlikely the interviewer will find any information that was not specifically looked for.  The clinical interview is seen a very good source of information although there are doubts concerning its reliability. This is because of the unstructured nature of the interview, as this prevents it being replicable. This presents a problem, as due to the confidential relationships required for them to work, the reliability cannot be tested. However, as the interviewer is unlikely to just conduct a singular interview, a “self corrective process” may occur, meaning that the psychologist can, after a few sessions, filter out information that appears to be incorrect or inconsistent. The data cannot always be used in relation to the DSM-IV but can still be very useful in identifying and assessing mental disorders in a less formal manner.

This problem is combated by the structured interview as a method for psychological assessment, as standardised information needs to be collected in certain circumstances such as in direct reference to DSM IV. Structured clinical interviews are characterised by a predetermined set of questions, and normally instructions on how and when to enquire for more information. An example of this is the Structured Clinical Interview (SCID) established by Spitzer, Gibbon and Williams in 1996 which used a ‘branching’ structure. This means that the answer the client gives to one question will determine the later questions the interviewer will ask. This has the advantage of being both replicable and able to obtain rich and informative answers, as although it is structured and pre-planned, there is also the opportunity to probe further into some answers where elaboration would aid the diagnosis. In this particular example and many more, answers are allocated a number between one and three to indicate the seriousness of the issue mentioned which would correspond to a different disorder.

The data collected by the methods above can be enriched by adding data collected by other means such as psychological tests. A large number of people are given a questionnaire, and the answers are recorded to produce statistical norms for each mental state, for example all the answers given by schizophrenic participants are collated and analysed to produce an average response of someone suffering with that condition. The same is done for mentally ‘normal’ people. Later, when needing diagnosis, people can complete the same questionnaire and have their answers compared to a wide range of others indicating different feelings and behaviours and that can be linked to a specific problem in very much the same way as the DSM-IV.

One type of psychological test is the self report personality inventory which involves the client stating whether listed emotions, behaviours or sensations are ones they experience. The most famous example is the Minnesota Multiphasic Personality Inventory (MMPI) devised by Hathaway and McKinley in 1943 and revised in 1989 by Butcher to include representation of ethnic minorities and Americans outside of Minnesota (MMPI-2). Although the original statements were suggested by clinical psychologists to be symptoms of each mental condition it was aiming to cover, these were only used if they corresponded to ‘normal’ participants disagreeing with statements indicating a disorder and diagnosed sufferers agreeing with it and so on, increasing the validity of the tests. Additionally, concerns about people being able to imitate normality or a mental illness have been counteracted by trick questions that would signify someone is attempting to project a false image of themselves. Nevertheless, Walters and Clopton (2000) claim that if the patient is aware of these measures it is still possible to convince the psychologist they have a healthy state of mind.

Projective personality tests, however, collect much more subjective data and work on the assumption that uncovering unconscious processes will uncover the problems with the mind in general. This is done by analysing interpretations of shapes or pictures, such as in the Roschach Inkblot Test which can concentrate on either what the client believes the shape to be or the form their responses take in reference to colour and positioning etc as demonstrated by Exner (1986). The first may indicate what is subconsciously on the patient’s mind and the latter may give an idea of how the patient perceives real-life situations. To be able to make a successful diagnosis from answered gathered by these means, there also needs to be ‘norms’, as explained in relation to the self report personality inventories. Consequently, a large number of ‘normal’ people and those considered ‘abnormal’ must be tested beforehand so that answers gathered after can be compared to each group. Viglion (1999) found that this is especially accurate in recognising schizophrenia, although this view has been criticised due to it probably just making apparent the communication problems characteristic of the disorder which can be detected by much simpler means.

Intelligence tests can also be used to assess for mental health problems. Binet developed the first of which, and they are normally referred to as an IQ test. They aim to measure mental functioning and involve testing many measures of this, such as speed of processing and verbal and non-verbal reasoning. Their main use in this field is to test and monitor degenerative mental conditions such as dementia and are very reliable, but deciding someone’s IQ cannot always indicate whether they are suffering from depression or not, for example, so their application is limited.

Observations can also be used to help assess people for various mental disorders, where specific behaviour is recorded and compared with behaviour associated with each condition in very much the same way as the methods mentioned previously. The difference is the psychologist can objectively observe the behaviour he or she feels is relevant for the diagnosis, as opposed to the patient themselves volunteering information.

Therefore it can be said that another key element of psychological assessment is interpreting the data collected, as simply answering ‘yes’ to the question ‘I don’t care what people think of me’ (taken from the MMPI) cannot automatically, without interpretation, mean the person is a psychopath. It does, however, indicate that the person is “irresponsible” and “has only has superficial relationships” which are symptomatic of psychopathy. This is especially true in relation to the inkblot tests mentioned previously but can be said for all forms of data collection, as the psychologist’s aim is to attribute the overt behaviour or responses to underlying feelings or mental states and then an appropriate condition.

Psychological assessment should, in all its forms, be reliable and valid and so this is another key element or else the whole system would be redundant – there would be no guarantee the assessments would indeed be testing for what they are supposed to, nor would they yield consistent results, leaving ill people undiagnosed and subjecting well people to unnecessary treatment. Evidence of this as an element is in the personality inventories in which several sources of information are consulted (clinicians, patients themselves and ‘normal’ people) before the criteria for each condition is set out, in order to ensure the test is valid and the “self corrective processes” present in clinical interviews ensure reliability.

Additionally, psychological assessment does not aim to simply label a person with a disorder but also to decide the most appropriate treatment. This is another key element of assessment as it is necessary to explore the causes and the situations the condition may have developed under through psychological assessment also. For example, people with schizophrenia are more likely to relapse if their family has high levels of expressed emotion (Koenigsberg and Handley 1986) and these may be helped by family therapy. However, if the family has always reacted in the way dictated by the therapy, the cause -and consequently the cure- lays elsewhere.

In conclusion, the key elements of a psychological assessment are the collection and interpretation of data, the comparison between said data and previously collected data (in the form of DSM-IV or that collected from self report inventories etc) and consequently an informed diagnosis achievable through interviews, psychological testing, observations and other means. Each method has its own strengths and weaknesses, although the latter can be combated by using them in conjunction with another. This makes the diagnosis especially accurate as different types of information are being gathered in different ways, counteracting the weaknesses and using the strengths to their full potential. Generally speaking, this means that psychological assessments should be consistent, reliable and valid and this can be achieved even if the assessment methods seem weak in one of these areas in isolation.