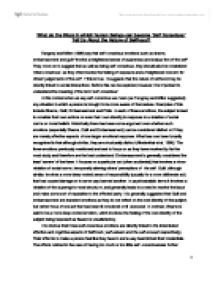 What do the Ways in which human Beings can become 'Self Conscious' Tell Us About the Nature of Selfhood?

What do the Ways in which human Beings can become 'Self Conscious' Tell Us About the Nature of Selfhood? Tangney and Miller (1996) say that self-conscious emotions such as shame, embarrassment and guilt "involve a heightened sense of awareness and evaluation of the self". They move on to suggest that as well as being self-conscious, they should also be considered 'other-conscious', as they often involve the feeling of exposure and a 'heightened concern for others' judgements of the self'. If this is true, it suggests that the nature of selfhood may be directly linked to social interactions. Before this can be explored, however, it is important to understand the meaning of the term 'self-conscious'. In this context when we say self-conscious we mean (as Tangney and Miller suggested) any situation in which a person is brought to be more aware of themselves. Examples of this include Shame, Guilt, Embarrassment and Pride. In each of these emotions, the subject is lead to consider their own actions or even their own identity in response to a violation of social norms or moral beliefs. Historically there has been some argument over whether such emotions (especially Shame, Guilt and Embarrassment) can be considered distinct or if they are merely affective aspects of one larger emotional response. What has now been broadly recognised is that although similar, they are structurally distinct (Niedenthal et al, 1994). The three emotions previously mentioned are best to focus on as they have received by far the most study and therefore are the best understood. ...read more.

behaviour). Tangney and Miller (1996) suggest that this is a more primitive emotion that serves an adaptive function at earlier stages of individual development (such as infancy and childhood). What they fail to consider is that this may actually be a useful response in circumstances where the negative interpersonal actions cannot be immediately remedied or where the subject would benefit from a period of social withdrawal to fully consider what has happened and what should happen. By affecting the self to the point where it needs to take remedial action, self control becomes the basis for ensuring individual's behaviour complies with social convention, even when no external sanctions are present. In this case the way human beings become self-conscious shows us that a basic aspect of selfhood lies in social interaction. Part of its nature is to mediate social interaction in order to maintain a positive presentation to others and so optimise an individual's functioning and opportunities within a community. The affective component of selfhood (self-esteem) is actually reliant on successful social conduct to function properly. Weigant (1983) gave further credence to this hypothesis by pointing out that the self-conscious emotions are also invoked by an imbalance of power in a social situation. If an individual has or enforces excessive power (such as a parent chastising a child too harshly) then guilt is felt and the suffer attempts to make amends. In the same vein shame can be the result of claiming or receiving excessive power, as well as being the victim of another who is employing excessive power. ...read more.

and affects an individual's 'social identity' (the public image, presented through roles and relationships). Guilt, in contrast, involves an 'information-oriented processing style' (with self exploration of personal issues) and affects an individual's 'personal identity' (conceptualising one's self as unique). In this case, it would seem that the style in which each emotion interacts with the self is distinct, but moreover the level of the self they interact with (personal versus social identity) are also different. It seems that selfhood involves categorisation of information about social roles and norms, as well as more fundamental personal information such as core identity and morality. These levels can then be accessed as needed, depending on context, and are in turn affected to different extents depending on the context. In conclusion it seems that there is a lot that can be learned about the nature of selfhood from the ways in which humans can become self-conscious. It seems that selfhood is largely socially based, or at least has a strong social function. It seems to either regulate or be regulated by social interactions. It motivates the individual to effectively perform their role in society. There is strong evidence that selfhood is not innate, but rather develops in relation to the circumstances of the individual. Selfhood is multifaceted and is adaptive. What is important to note however is that these conclusions are by no means adequate to fully understand the nature of selfhood. Much research is needed to comprehensively explore the various aspects of selfhood that self-consciousness highlights. ...read more.