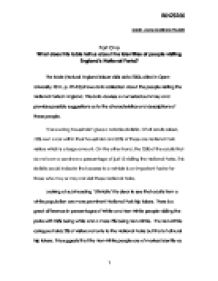 Sarah Jayne Makinson TMA03 Part One What does this table tell us about the identities of people visiting England's National Parks? The table (Natural England leisure visits data 2005, cited in Open University, 2011, p. 22-23) shows data collected about the people visiting the National Parks in England. This data devises a numerical summary and provides possible suggestions as to the characteristics and descriptions of these people. 'Car-owning household' gives a notable statistic. Of all adults asked, 75% own a car within their household and 87% of these are National Park visitors which is a large amount. On the other hand, the 25% of the adults that do not own a car show a percentage of just 13 visiting the National Parks. This statistic could indicate that access to a vehicle is an important factor for those who may or may not visit these National Parks. Looking at sub-heading 'Ethnicity' it is clear to see that adults from a white population are more prominent National Park trip takers. There is a great difference in percentages of White and Non-White people visiting the parks with 96% being white and a mere 2% being Non-White. ...read more.

25). With these people not associating the city with the National Park a sense of alienation is produced in relation to the urban and the rural community. The urban areas of the area close to the park appear to be detached as they are unable to see what goes on there. To feel included and be a part of the environment it may be important to see and identify a place in order to feel whether an identity can be placed with such environments. Bajaria displays an example of discourse in the way that he describes his role, suggesting he understands that he is of ethnic minority and the views of wider society towards him and his appointment make him of marked identity. As he speaks of himself he is performing his identity. Bajaria is presenting positive information about the Peak District and of his associations with it firsthand. This could be an example of impression management as he is describing his own identity and also what he is there to do. Goffman's 1959 theory, "suggested that in every situation of ordinary life people behave in ways which will tell others who they are, what they're doing and what they expect and want to happen" (Hinchliffe, 2009, p. ...read more.

Marked identities such as, "long-term mental patients discharged from hospitals...crack addicts, thieves, alcoholics, hobos, the temporarily jobless, the alimony defaulters, rent-hike victims' (Hinchliffe, 2009, p. 175) were used. Identities of difference such as these can create negative responses creating relationships of equal negativity when in coherence with place. Identities can derive from situation and place but identity position can change. Personal identity is who you are. Anthony Giddens and other sociologists suggest, "that each of us needs a personal identity and in contemporary society we have to make it for ourselves" (Hinchliffe, 2009, p. 187). Sometimes traditions and customs are lost and places can change meaning situated identity will always altar. As Jovan Byford describes, "identity as a lifelong product of making and changing" and needing to, "change and transform in situations throughout life" (Studying Identities, 2009, track 1). In conclusion to the points taken from the article it could be said that our identities can depend on the relationship with the space and environment we are in. Through social constraint and opinion on factors such as culture and ethnicity, identities can be viewed differently depending where they are and with this produce both negative and positive attitudes. Identities can be included and excluded from a place with these attitudes by either creating belonging identities or an identity that becomes detached. ...read more.