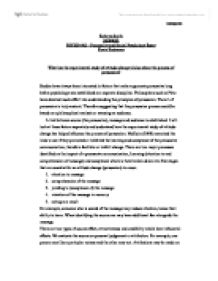 What has the experimental study of attitude change told us about the process of persuasion?

Kathryn Smith 20089003 PSY2004AS - Personality and Social Psychology Essay Kevin Buchanan What has the experimental study of attitude change told us about the process of persuasion? Studies have always been interested in factors that make arguments persuasive long before psychology was established as a separate discipline. Philosophers such as Plato have devoted much effort into understanding the principles of persuasion. The art of persuasion is truly ancient. Therefore suggesting that the persuasion process could be based on a philosophical analysis or swaying an audience. A link between source (the persuasive), message and audience is established. I will look at these factors separately and understand how the experimental study of attitude change has helped influence the process of persuasion. McGuire (1968) examined the links to see if they promoted or inhibited the learning and acceptance of the persuasive communication, therefore facilitate or inhibit change. There are two major processes identified on the impact of a persuasive communication, Learning (attention to and comprehension of message) and acceptance which is then broken down into five stages that are essential for an attitude change (persuasion) to occur: 1. attention to message 2. comprehension of the message 3. yielding to (acceptance of) ...read more.

For example, for an effective message in encouraging young adults' to practise safe sex, audiences must be ensured that there are few or no costs involved, removing any form of embarrassment, suggesting convenient locations for contraception and offering a supply of free condoms. It is not just the communicators and the sources that are involved in the effects of the power of persuasion, the audience are just as fundamental. Eagly and Warren (1976) found that characteristics are a major factor within the audience. Intelligence affects the number and complexity of arguments within the message. Higher levels of self-esteem and intelligence produce an understanding of message and therefore the audience a more likely to accept message but are also more likely to question and resist message. This notion supports the Sheriff & Hovland (1961) Social judgement theory. Accepting a persuasive message depends on whether it falls within our latitude of acceptance (openness to persuasion) or latitude of rejection (too distant from our initial attitude to be assimilated). Latitude of acceptance greater for attitudes that is unimportant to us. Latitude of rejection greater if holds extreme attitude or personal involvement. For example, Brown (1999) found people were more in favour for treatment and punishment for sex offenders but were less so if this was to take place in their community. ...read more.

Although incentives may be effective in changing attitudes the amount of attitude change is often inversely related to the magnitude of an incentive. From looking at the communicator, the source, the medium and the audience, structure, content and organisation of message is crucial. All this must be taken into account for an effective persuasive communication. The stability of an attitude depends on it's structure, however the structural properties of an attitude can be influenced by behaviour and information processing. Reference Ajzen, I & Fishbein, M. (1980) Understanding Attitudes & Predicting Social Behaviour. London: Prentice Hall. Brehm, S.S & Brehm, J.W. (1981) Psychological Reactance: A Theory of Freedom and Control. New York: Academic Press. Chaiken, S. (1971) Communicator Physical Attractiveness and Persuasion. Journal of personality & social psychology, 37, 1387-1397. Chaiken, S & Eagly, A.H. (1976) Communication Modality as a Determinant of Message Persuasiveness and Message Comprehensibility. Journal of personality and Social psychology, 34, 605-614. Cialdini, R.B. (1993) Influence: Science and Practice (3rd edn). New York: Harper Collins. Eagly, A.H. (1974) Comprehensibility of Persuasive Arguments as a Determinant of Opinion Change. Journal of personality and social psychology, 29, 758-773. Hovand, C.I & Weiss, W. (1951) The Influence of Source Credibility on Communication Effectiveness. Public opinion quarterly, 15, 635-650. Petty, R.E & Cacioppo, J.T. (1986) The Elaboration Likelihood Model of Persuasion. New York: Academic Press. 20089003 ...read more.