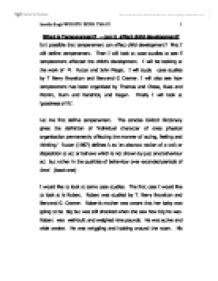 What is Temperament? - can it affect child development?

What is Temperament? - can it affect child development? Is it possible that temperament can affect child development? First I will define temperament. Then I will look at case studies to see if temperament affected the child's development. I will be looking at the work of M. Rutter and John Piaget. I will study case studies by T Berry Brazelton and Bertrand G Cramer. I will also see how temperament has been organised by Thomas and Chess, Buss and Plomin, Dunn and Kendrick, and Kagan. Finally I will look at 'goodness of fit'. Let me first define temperament. The concise Oxford Dictionary gives the definition of 'individual character of ones physical organisation permanently affecting the manner of acting, feeling and thinking.' Rutter (1987) defines it as 'an abstract notion of a trait or disposition to act or behave which is not shown by just one behaviour act but rather in the qualities of behaviour over extended periods of time'. (book one) I would like to look at some case studies. The first case I would like to look at is Robert. Robert was studied by T. Berry Brazelton and Bertrand G. Cramer. Robert's mother was aware that her baby was going to be big but was still shocked when she saw how big he was. Robert was well-built and weighed nine pounds. He was active and wide awake. He was wriggling and looking around the room. ...read more.

This was heightened when the staff questioned the mother as to whether she had been smoking, drinking, or taking any dugs whilst pregnant. These two babies have very different beginnings. As a result of their birth experiences, the parents and medical staff reacted in a different way. With Robert, the atmosphere was relaxed and happy. The baby was put on his mothers tummy. He was allowed to relate to his parents without medical intervention. Robert was calm and content. With Chris, straight away the atmosphere was tense with the staff taking him to check him over. He was irritated and unhappy. Chris did not like to be handled and almost seemed to reject his parents. The first impression Roberts parents had was that Robert was happy and they were doing things the right way. With Chris there was concern that things had 'gone wrong' , that he did not want to be treated in the normal way. Such first impressions can be long lasting. Although the report does not state how the babies were when they grew up, it can already be seen that the attitude to these babies differ. Compare how stressed the medical team seemed to be with Chris to how relaxed they were with Robert. The parents, naturally followed suit. Once the babies are home any anxieties will heighten without the support of the nursing staff. Robert may well be treated with a confident hand, while Chris may be treated as 'difficult'. ...read more.

By measuring temperament before and after the arrival of a sibling, they could see how a child would react. It is also dependant on the relationship between mother and older sibling. If a child was anxious before the sibling arrived then it would be more so after. Social setting is also consistent to the behaviour of the child. Lerner et al has done extensive research with goodness of fit. The goodness of fit looks at the characteristics of a person and the social environment. For instance a child who is not very adaptable would be best suited to parents of a strict timetable and regime. If the 'fit' is not right and they parents are more haphazard in their care, the child will experience problems. Conclusion So to return to the original question, does temperament affect development? There are many different way to evaluate temperament. Thomas and Chess use nine- dimension framework, while Buss and Plomin use three. Kagan and Dunn and Kendrick use more social framework. A different and interesting approach is Lerner et al and the 'goodness of fit'. This can also be seen as a social approach. If you use Sameroff transactional model it is obvious that temperament affects the attitude of the main care giver. Thus it is possible to have an effect on development. If a child is seen as having a difficult temperament the main care giver tends to withdraw and have less contact. This in turn will affect how quickly and easily the child can be influenced by adults. ...read more.