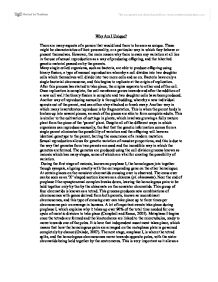 Why Am I Unique?

There are many aspects of a person that would lead them to be seen as unique. These might be characteristics of their personality, or a particular way in which they behave or present themselves. However, the main reason why there is even any variation at all lies in the use of sexual reproduction as a way of producing offspring, and the inherited genetic material passed on by the parents.

Many single celled organisms, such as bacteria, are able to produce offspring using binary fission, a type of asexual reproduction whereby a cell divides into two daughter cells which themselves will divide into two more cells and so on. Bacteria have only a single bacterial chromosome, and this begins to replicate at the origin of replication. After this process has started to take place, the origins separate to either end of the cell. Once replication is complete, the cell membrane grows inwards and after the addition of a new cell wall the binary fission is complete and two daughter cells have been produced. Another way of reproducing asexually is through budding, whereby a new individual sprouts out of the parent, and can either stay attached or break away. Another way in which many invertebrates reproduce is by fragmentation. This is when the parent body is broken up into several pieces, an each of the pieces are able to form complete adults. This is similar to the cultivation of cuttings in plants, which involves growing a fully mature plant from the piece of the ‘parent’ plant. Despite all of the different ways in which organisms can reproduce asexually, the fact that the genetic information comes from a single parent eliminates the possibility of variation and the offspring will have an identical genotype to the parent, barring the occurrence of a random mutation.

Sexual reproduction allows for genetic variation of massive proportions, and this is due to the way that gametes from two parents are used and the incredible way in which the gametes are formed. The gametes are produced using the cell division process known as meiosis which has many stages, some of which are vital for creating the possibility of variation.

During the first stage of meiosis, known as prophase I, the homologues join together though synapsis, aligning exactly with the corresponding gene on the other homologue. At certain places on the nonsister chromatids crossing over is observed. The cross over can be seen as an ‘X’ shaped section known as a chiasma (pl. chiasmata). Near the end of prophase I the synaptonemal complex breaks down, leaving the homologous pairs to be held together only by the by the chiasmata on the nonsister chromatids. This group of four chromatids is known as a tetrad. This process produces new combinations of chromosomes with genes derived from both parents, known as recombinant chromosomes, and this type of crossing over can take place up to three times per chromosome pair on average in humans. A lot of important events take place during prophase I, which explains why it takes up over 90% of the total time needed for one cycle of meiotic division to take place (Campbell and Reece, 2005). Metaphase I begins once the tetrads are formed and the kinetochores are linked to the microtubules, ready to move towards one of the poles. It is here that independent assortment takes place, which means that how the homologous pairs are arranged on the metaphase plate is governed completely by chance (Oxlade, 2007). The next stage, anaphase I, is where the tetrad splits, and the homologous chromosomes move towards opposite poles, with the sister chromatids being held together by the centromeres. This is very important as it allows a second division to take place the second part of meiosis, which will be explained later. Following this is telophase I which is where the daughter cells are produced through Cytokinesis and the formation of a cleavage furrow. It is essential to be aware of the fact that at this point the two daughter cells have a haploid set of chromosomes, but the chromosome is made of two sister chromatids. It is this that enables a second part of meiosis to take place, which involves the separating of the sister chromatids. The second stage begins with prophase II, where the spindle apparatus is formed and the chromosomes move towards the metaphase plate. Metaphase II begins with the chromosomes taking up their place on the metaphase plate, and the kinetochores linking up to the microtubules, making it ready to be split just as they would if this was a mitotic cycle. However, the special difference here is that because of the crossing over that took place in prophase I, the sister chromatids are not genetically identical. It is during anaphase II that the centromeres of the chromosomes split and the sister chromatids move towards opposite poles of the cell. Now that the genetic material has been divided accordingly, the process of meiosis can be completed. As in the first part of meiosis, telophase takes place simultaneously to Cytokinesis, an as the cytoplasm begins to split the chromosomes begin to uncoil and the nuclei are formed. The product is four daughter cells all with haploid sets of chromosomes, but each of the cells is genetically different from the parent cell and the other daughter cells.

The formula for working out the number of possible combinations of chromosomes from independent assortment is 2n, whereby the n represents the haploid number of chromosomes. In the human instance the haploid number is 23, which works out to approximately 8 million. With this happening in both male and female gametes, it means that anyone of the 8 million maternal gametes could be fertilized by any one of the 8 million paternal gametes. This means that a resulting zygote could have more than 64 trillion diploid combinations. This is before including the variation brought on by the crossing over during prophase I, and taking this into account means that the number of possibilities is of truly epic proportions (Campbell and Reece, 2005). This makes everybody genetically unique.

Now that the reason behind how genetic variation comes about in humans has been discussed, an understanding of why such genetic variation is necessary needs to be achieved. There are a number of reasons for being so genetically varied, and this can be seen from the studies of Charles Darwin. According to Darwin, the most offspring will be produced by the individuals who survive best in their surroundings. This means that the genes inherited from the parent make the offspring better suited to survive in the conditions of the current environment. Variation is necessary to ensure that, as new generations are produced at least some members of a population would be able to survive if the environmental situation were to change

From all the information gathered, it is obvious to see that it is the use of sexual reproduction in humans that allows such an extent of variation to occur that everybody is seen to be genetically unique. However, it is also very obvious that this degree of variety was extremely important when looking back at evolution, as we may not be here today if our ancient ancestors were not able to produce variety through the generations that enabled populations of humans to adapt an survive.