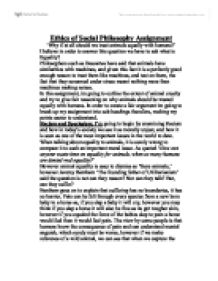 'Why if at all should we treat animals equally with humans?'

Ethics of Social Philosophy Assignment 'Why if at all should we treat animals equally with humans?' I believe in order to answer this question we have to ask what is Equality? Philosophers such as Descartes have said that animals have similarities with machines, and given this fact it is a perfectly good enough reason to treat them like machines, and test on them, the fact that they screamed under stress meant nothing more than machines making noises. In this assignment, im going to outline the extent of animal cruelty and try to give fair reasoning on why animals should be treated equally with humans. In order to create a fair argument im going to break up my assignment into sub-headings therefore, making my points easier to understand. Racism and Speciesism; I'm going to begin by examining Racism and how in today's society we see it as morally unjust, and how it is seen as one of the most important issues in the world to date. ...read more.

This can be described as the view that we see animals as only existing for our pleasure and convenience. I myself am a meat eater, and like to think I stand behind my argument that, if everyone became a vegetarian, animals would die for no reason. I am firmly against the use of fur as a fashion accessory, though however believe it is deemed right for an Eskimo to wear it, as they are living in an environment wear they will eat the meat, so why not wear the fur that to them is\an essential in keeping warm. Meat flesh is not necessary for us to live on; we will not starve if we go without. In today's society we have enough substitutes to excessively decrease the amount of meat eaten. Feeding the animals grain and corn is senseless as we will get more nutrition eating it directly ourselves. Experimenting on animals When it comes to experimenting, I believe that people always have a view. ...read more.