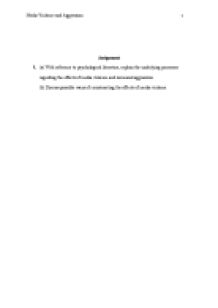 With reference to psychological literature, explain the underlying processes regarding the effects of media violence and increased aggression.

﻿Media Violence and Aggression Assignment 1. (a) With reference to psychological literature, explain the underlying processes regarding the effects of media violence and increased aggression. (b) Discuss possible ways of counteracting the effects of media violence. The effects of media violence on aggressive behavior have attracted many researchers over the past decade (Bandura, 1961, Berkowitz, 1962, Zillmann, 1988, Anderson, 2003, Huesmann, 2007). As individuals in society displayed more aggressiveness in their behaviors, researchers have endeavored to identify the influence of media violence on person?s action, with the aim of proposing intervention strategies that would minimize the effects of media violence (Baron, Branscombe, & Byrne, 2009). Huesmann and Taylor, (2006) define media violence as ?visual portrayals of acts of physical aggression by one human or human-like character against another (p 395).? Human-like or fictional media violence can be encountered on medium such as television and film, video games and music. Psychologists such as Anderson, Berkowitz, Donnerstein, Huesmann, Johnson, Linz, Malamuth and Wartella, (2003) believe that fictional social interaction contributes to increased aggressive behaviors in individuals. These psychologists further posit that exposure to violent television, movies, video games and music increase the likelihood of aggressive behavior by people exposed to them (p. 40). Aggressive behavior or aggression as postulated by social psychologist such as Freud, and Lorenz, (1974) is defined as an innate urge to aggress against others (Baron, Branscombe, & Byrne, 2009). Baron and Richardson, (1994) and later Anderson and Bushman, (2002) posit a definition for aggression which state that the concept can be described as behaviors intended to injure another (Kenrick, Neuberg, & Cialdini, 2010). Additionally, Baron and Richardson (1994) proposed that persons to whom the behavior is directed towards is motivated to avoid such treatment about to be inflicted upon him or her (Hewstone & Stroebe, 2003). Early Social psychologist such as Berkowitz, (1989) and later Zillmann, (1994), suggest that individuals are prone to harm others because of external conditions which drives one to perform acts of aggression, a theory referred to as the drive theory (Baron, Branscombe, & Byrne, 2009). ...read more.

This tendency to react with increased aggression is what Zillmann, (1994) attributes to the fact that the emotional state encountered by viewing the violence in the movie (increased heart rate, sweaty palms and elevated blood pressure) had resulted in an enhanced aggressive response in another given situation (Kenrick, Neuberg, & Cialdini, 2010). Additionally, not only movies depict violence but new reports are also filled incidents of violent killing. For example, in Grenada the month of July 2012 there were three reported chopping instances (Editor, 2012). In each case the media presented wide coverage of the perpetrators which could account for others getting involved in the same violent activity. Huesmann and Taylor, (2006) support this claim and states that not all violence occur in fictional form. The Marilyn Monroe effect is one study which showed 2.5% increase in suicide rates within the populace, as a result of news report of suicide (Huesmann & Taylor, 2006). The last short-term process as posit by Anderson et al., (2003) that contributes to increase in aggressive behavior is observation learning and imitation (social learning theory). Observation learning according to Slavin, (2006) is defined as ?learning by observation and imitation of others (p.154).? After viewing media depicting violence, young children imitated the violent behavior of the actors thus contributing to increased aggression in children. Modeling and imitation are processes most likely to occur in young children because psychologist believes that young children are more likely to imitate behaviors they view as rewarding and that learning occurs without intention and awareness (Anderson, et al., 2003). The process involved in this theory is that the model may be attractive to the child and is also rewarded for the violent behavior; therefore, the child may model or mimic the behavior. For example, in the movie ?Rambo? the main character goes through the movie stabbing, shooting and fighting with the persons who did him injustice and he is rewarded at the end for his action. ...read more.

This view is supported by researchers such as Anderson et al., (2003) who highlighted that a study conducted concluded that parents who spoke negatively about voilent media content and who restricted the exposure of their children to such content, reported that they children was less prone to aggressive behaviors. Finally, media violence can be regulated or the rating of violent films could be encouraged (Anderson, et al., 2003). This is a technological approach to minimizing the exposure to media violence. The Telecommunication Act of 1996 makes it mandatory for manufacturers to include V-chips in all new television. The Act also allows for a rating system to be adapted. The V-chip and rating system are means by which parents can block inappropriate shows or content from being viewed by children. Limiting the exposure to violent movie content is thought to be one strategy that can decrease the effects of media violence (Lomonaco, Tia, & Ottaviano, 2010). However, even though the television are equipt with the technology individuals have not be vigilant in their use of the device and furthermore, movie industry has been slow to implement the rating system because of economic factors. The industry however, has put in place other measures such as Weemote and Tv guides which allows some level of control by parents. The research on media violence and aggressive behavior is extensive. The literature suggests that there are both short and long term effect of media violence. The social learning theory is the main process by which individuals learn violent and aggressive behavior because of the rewards given to the hero in movies and the lack of punishment for wrong doing. Other processes include priming, arousal/excitement and desensitization. Moderator effects such as individual characteristics and family structure are among the other factors which determines the extent to which individuals engage in violent behavior. The research on strategies for minimizing the effect of media violence is not as many as the effects however, media literacy, parental monitoring and guidance and techonological innovation such as V-chips in televisions are put forward by researchers to curb the efffects of media violence. ...read more.