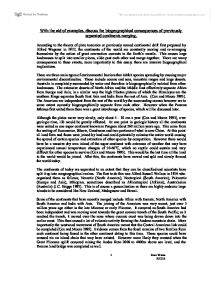 With the aid of examples, discuss the biogeographical consequences of previously separated continents merging.

With the aid of examples, discuss the biogeographical consequences of previously separated continents merging. According to the theory of plate tectonics or previously named continental drift first proposed by Alfred Wegener in 1912, the continents of the world are constantly moving and re-arranging themselves by the action of great convection currents in the Earth's mantle. This causes large landmasses to split into smaller pieces, slide past each other and merge together. There are many consequences to these events; more importantly to this essay, there are massive biogeographical implications. There are three main types of environmental barriers that inhibit species spreading by causing major environmental discontinuities. These include oceans and seas, mountain ranges and large deserts. Australia is completely surrounded by water and therefore is biogeographically isolated from other landmasses. The extensive deserts of North Africa and the Middle East effectively separate Africa from Europe and Asia; in a similar way the high Tibetan plateau of which the Himalayas are the southern fringe separates South East Asia and India from the rest of Asia. (Cox and Moore 1993). The Americas are independent from the rest of the world by the surrounding oceans however are to some extent currently biogeographically separate from each other. However when the Panama Isthmus first united them there was a great interchange of species, which will be discussed later. ...read more.

The most successful mammal would be the cricetid rodents that have diversified into 45 genera in South America (Cox and Moore 1993). The reasons for the North America fauna success is mere speculation however it is thought that due to the fact that North America was part of Laurasia for a long time after South American split from Gondwanaland and remained a separate continent, meant that the North American species had been through millions of years of competition with species of Laurasia and were therefore fitter in Darwin's terms and could compete very well with the South American species which had been competing merely amongst themselves for a long time. "Widely ranging species, abounding in individuals, which have already triumphed over many competitors in their own widely extended homes will have the best chance of seizing on new places, when they spread into new countries." Charles Darwin, The Origin of Species, 1859 The consequences of this continental linkage were a great loss of South American flora and fauna; in particular very few living mammals today of South America are the original species from the early Cenozoic. However there was also a flourishing of the well-adapted North American species as a result of the fusion. This result advocates the general assumption that continental fusion slows down evolution and brings previously separated species into competition and therefore causing major extinctions. ...read more.

The examples given in this essay describing the merging continents are not perfect as in none of the detailed examples fully fuse (yet) like in the case of the formation of Pangaea. The example of the North America and South American faunal interchange did show the biologically destructive effects of continental merging as many South American species were lost to the more dominant North American invaders. However the other detailed example depicting the interchange of species between North America and Asia showed a more positive side of possible mergence as species diversity increased in North America by the invasion of more Eurasian fauna and flora. The Asia/North America example is however poor as the two continents did not fuse but a land bridge formed periodically to help species disperse without completely removing the environmental barrier that once separated the realms and therefore forming disjunction's of many species that made the trip. The continuous severing of the Bering strait prevented the continuous environmental conditions required for the realms to unite as one at the cost of many weaker species. A general conclusion would be to say that consequences of continental merging depend highly upon which continents are being discussed but generally anytime two landmasses meet, there will be a massive interchange of species and interspecific competition will take place on a large scale, where Darwin's theory of 'survival of the fittest' will be of most importance. ...read more.