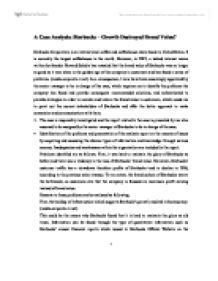 A Case Analysis: Starbucks - Growth Destroyed Brand Value? Starbucks Corporation is an international coffee and coffeehouse chain based in United States. It is currently the largest coffeehouse in the world. However, in 2007, a leaked internal memo written by founder Howard Schultz has revealed that the brand value of Starbucks was no longer as good as it was when in the golden age of the company in customers and has faced a series of problems. (media.corporate-ir.net) As a consequence, I now have been assumingly appointed by the senior manager to be in charge of the case, which requires me to identify the problems the company has faced and provide consequent recommended solutions; and authenticated to provide strategies in order to recreate and restore the brand value in customers, which needs me to point out the current stakeholders of Starbucks and offer the better approach to make connection and communication with them. 1. The case is responsibly investigated and the report related to the case is presented by me who assumed to be assigned by the senior manager of Starbucks to be in charge of the case. * Identification of the problems and presentation of the analysis report on the reasons of issues by acquiring and assessing the diverse types of information and knowledge through various sources. Inadequacies and weaknesses within the organization are included in the report. Problems identified are as follows. First, it was hard to maintain the glory of Starbucks as before and there was a tendency to the loss of Starbucks' brand value. Moreover, Starbucks' customer traffic has a slowdown therefore profits of Starbucks tend to decline to 28%, according to the previous sales revenue. ...read more.

The CSGs basically "aim to set standards for producers, which, if achieved, guarantee a premium price for their coffee crop." (www.greenbiz.com) As a result, in order to successfully get the premium price, the suppliers must make sure that they have made the checking on their own to meet the requirements of the Guideline, which also includes additional taste tests by Starbucks. This is an endeavor made by Starbucks in its business that to keep the constant high quality on its brand through suppliers. - Farmers: Fair trade has played an important role in this kind of stakeholders. As a matter of fact, Starbucks purchases coffee from farmers in 29 different countries. Once farmers have achieved multiple qualifications which set down by the Fair Trade Foundation and Starbucks practices, the company will therefore buy their coffee at a higher than market price and make sure of the contentious purchases in the future. (www.treehugger.com) Resulting from this, the farmers get more stability and security on whether or not their crops will be sold and, as mentioned previously, they are able to get the premium price if they followed the Starbucks Coffee Sourcing Guidelines. This is not only for making sustain supplies in Starbucks' business, but also for farmers' benefits and their motivation on supplying quality coffee corns. - Shareholders: Starbuck's shareholders will be given dividends and they have the right to vote on the company's initiatives. - Governments: Issues of Starbucks sometimes need the support of municipal governments. - Community members: "Every Starbucks is a part of community." (www.starbucks.com) This is a belief held by the company. In other words, Starbucks believes that being good neighbors and helping them thrive would be the commitment wherever we do business. ...read more.

Then, if it is in the capability of Starbucks, the Network can be expanded to public media, such as movies, music and TV. The purpose of this is to connect Starbucks with the daily lives of customers. For suggestion, the company could either made its own films or soundtrack albums relating to the sense and satisfaction of the experiences in Starbucks, or opens a Starbucks TV channel for broadcasting programs made independently or by third-party that spreads the coffee culture, say, a documentary program can be made for the knowledge of coffee or introducing what the life style is all about in Starbucks. Last, the approach of receiving and responding of the feedbacks through previous steps should be made. In conclusion, the undermined brand value of Starbucks resulted from the central point of only the economic efficiency rather than customers. It has also damaged the relationship between Starbucks and its stakeholders. The incident of Starbucks has taught the company a valuable lesson that the factors which affect the successfulness of the company cannot solely narrowed in how to make profit through selling. In fact, it could even adversely influence the company's growth, as it has been shown in the case. Rather than that, figuring out ways that makes customers could truly felt and found the focus of Starbucks on them is of greater importance. Starbucks should make herself not only to be expensive but experienced as the best thing of a journey, to Starbuck, is not the goal, of getting a cup of coffee; it's the experience within the journey that makes that best of all. Reference: BPP Professional Education, Management, London, Aldine House, 2004 http://media.corporate-ir.net/media_files/irol/99/99518/2007AR.pdf http://blogs.hbr.org/quelch/2008/07/how_starbucks_growth_destroyed.html http://www.mhhe.com/business/management/thompson/11e/case/starbucks-1.html http://blogs.hbr.org/quelch/2008/07/how_starbucks_growth_destroyed.html http://en.wikipedia.org/wiki/Starbucks http://www.greenbiz.com/news/2004/04/21/coffee-talk-supplier-guidelines-starbucks http://www.treehugger.com/files/2010/03/starbucks-farmers-impact-of-fairtrade.php http://www.starbucks.com/responsibility/community/community-service http://www.starbucks.com/about-us/company-information/shareholders-meeting http://news.starbucks.com/article_display.cfm?article_id=510 http://assets.starbucks.com/assets/sobc-fy09-eng.pdf http://www.thetimes100.co.uk/theory/theory--decision-making-stakeholders--132.php http://www.sjrtmdl.org/stakeholders/process/process_jul10_02.pdf http://seattletimes.nwsource.com/html/businesstechnology/2014578662_starbucks24.html http://en.wikipedia.org/wiki/Personal_Network ?? ?? ?? ?? 1 ...read more.