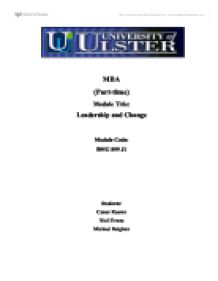 A report on the best practice of organisational change.

MBA (Part-time) Module Title: Leadership and Change Module Code: BMG 899 J1 Students: Conor Keown Niall Evans Michael Deighan To: Professor Stan Cromie From: Michael Deighan Conor Keown Niall Evans Date: 7th December 2003 Re: A report on the best practice of organisational change. Table of Contents 1. Executive Summary. 2. Introduction. 3. A definition of change and its historical context. 4. The nature of organisations. 5. The nature of organisational change. 6. An example of change management in Gypsum Industries. 7. Conclusions. 8. Appendices. 9. Bibliography 1. Executive Summary According to Carnall (1992) "We live in a period of accelerating change". Fundamental changes in society restructure our lives. Advances in new technology means that the impossible becomes commonplace (computer generated animation, robotics, space exploration). It is true to say that change has always been an integral part of the manager's job. This has never been truer than it is in today's environment. The recent bombings in Istanbul in Turkey has only underlined what has occurred in the business environment since the events of September 11th 2001 in New York i.e. that no matter how well you plan or indeed plan for change it is impossible to predict the impact that the events in the external environment will have on your organisation. There is no way that the airline industry, stock markets or governments could have planned or prepared for the effects caused by the World Trade Centre disaster, nor indeed the impact on HSBC banks across the globe after the terrible events in Istanbul recently. These events, as well as the corporate scandals of Enron and WorldCom, have battered the global economy and have made it clear that we need to look at the changed world of management and explore how they impact on the manager's job. Change is all around us and the capacity to manage change effectively is a crucial attribute of the successful manager in today's organisation.(Clarke, 1994) ...read more.

This matches with a proactive organisation scanning its internal and external environments for potential triggers for change as described by Senior (2002). The objective was to create a more flexible, or as Morgan describes "a more organic" organisation, that would be able to cater for the diverse needs of customers and of course exploit all cost advantages to remain competitive in the marketplace. There was no doubt that changes were being forced upon the organisation but G.I. were in fact taking proactive steps to ensure they maintained the position as market leader in their chosen market. The principal change agent in the programme was the Chief Executive (Mr Kieran Millar), with assistance from an outside consultant to facilitate in the change process. It was recognised as a messy problem characterised by its complexity. To implement effective change in both the formal and informal aspects of the organisation it was fundamental that the change agent identified with the status quo as most individuals had satisfaction with it. Only by doing this would effective change be achieved. (Burnes, 1992) Focusing on the formal aspects of organisational life, such as structure, gives only part of the explanation of why and how organisations choose to change and if they do so what form that change might take. French and Bell (1990) used the Iceberg Metaphor to illustrate the difference between the overt and covert aspects of organisational life. The more informal or covert aspects of organisational life must be addressed, that is the prevailing value, attributes and beliefs about what should be done and how - the culture which is part of and surrounds organisations, and the politics which are equally important in any examination of organisations and change. (Senior, 2002: Dawson, 2003 ) Morgan (1997) argues that the culture and politics of many organisations constrain the degree of change and transformation in which they can successfully engage, even though such change may be highly desirable for meeting the challenges and demands of the wider environment. ...read more.

It is not surprising; therefore that individuals and groups are likely to favour strategies, which can be pursued in a devolved rather than integrated way. As devolution sweeps through he large organizations there is considerable danger that one casualty will be the ability to co-ordinate joint ventures between businesses, divisions or departments as the culture at subunit level strengthens at the expense of a cohesive corporate culture. Control Systems. Observing the types of control system in the organization, and the issues that are the most closely monitored or promoted can assist understanding of an organisation's paradigm. Reward systems are important indicators of what behaviours are encouraged within the organization, and can prove to be a major barrier to the success of any change. For example an organization that has individual based bonus schemes will find it very difficult to introduce team based reward systems based on quality rather than quantity. In a more general sense it is useful observing whether control systems are geared to reward or punishment, since this will influence the dominant attitudes to risk taking. Power Structures. Power is a key force that shapes organizational culture, and also a means whereby some expectations influence change more strongly than others. Power often accrues to those perceived most able to reduce uncertainty in organizations. Since the paradigm is the set of assumptions by which people reduce their personal uncertainty, change may require an attack on the power structures that protect and legitimize the paradigm. Therefore an important issue to assess is the strength of belief among the most powerful individuals and groups; in other words, whether they are idealists or pragmatists. Appendix 7. Reasons Why People Resist Organisational Change 1. Lack of Trust 2. Belief that Change Is Unnecessary 3. Belief that the Change Is Not Feasible 4. Economic Threats 5. Relative High cost 6. Fear of Personal Failure 7. Loss of Status and Power 8. Threat to Values and Ideals 9. Resentment of Interference Source: Yukl, G (2002). Leadership in Organisations. Prentice Hall. 9. ...read more.