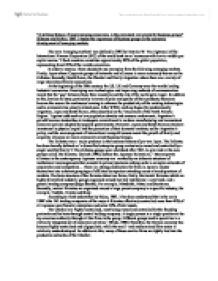 &quot;A striking feature of most emerging economies, is the prominent role played by business groups&quot; (Khanna and Rivkin, 2001,) Assess the importance of business groups in the economic development of emerging markets.

"A striking feature of most emerging economies, is the prominent role played by business groups" (Khanna and Rivkin, 2001,) Assess the importance of business groups in the economic development of emerging markets. The term 'emerging markets' was defined in 1981 by Antoine W. Van Agtamael of the International Finance Corporation (IFC) of the world bank as an 'economy with low-to-middle per capita income.'1 Such countries constitute approximately 80% of the global population, representing about 20% of the worlds economies. In order to answer, I have decided to use examples from the following emerging markets. Firstly, Japan whose Corporate groups of networks and alliances is more commonly known as the Zaibatsu. Secondly, South Korea, the Chaebol and finally Argentina where there are a variety of large interrelated family connections. At the beginning of the 20th century, the US, UK and Germany were the worlds leading Industrial economies. Developing new technologies and improving methods of communication meant that the 'gap' between these three countries and the rest of the world grew larger. In addition to this, barriers to entry, particularly in terms of price and quality of their products, they soon became the source for continuous learning to enhance the productivity of the existing technologies and to commercialise closely related ones. After WWII, catch up began for predominantly Argentina, Japan and South Korea, often described as the 'latecomers of the North Atlantic Region.' ...read more.

The two groups, The Keiretsu from Japan, and the Chaebol in South Korea share similarities in the historical and developmental experiences of their past. Their business firms also share common features of Confucian-based familism. Hamilton and Feenstra (1998:128-9) concur that 'In all these background variables, economic, social and cultural, Taiwan and South Korea are as nearly the same as could be imagined between any two countries in the world today. Yet the economics of these two countries are organised in radically different ways.' Business groups such as this one are prevalent especially in emerging markets, as there are few entrepreneurs with the ability and will to industrialise, where there as there are may types of Industries that could be developed. It is therefore, almost inevitable, that a single big entrepreneur will come to manage a variety of businesses, in the pocess of forming the Zaibatsu or Chaebol. Khanna and Palepu (1999) wrote that, " It is important to recognise that emerging economies unlike those of developed nations, lack many of the essential supporting institutions we tend to take for granted. Court systems, contract law, stock markets, accounting standards, and others that facilitate entrepreneurs and growth are often weak, archaic or entirely missing." Khanna later suggests that by providing substitutes for these kinds of gaps in infrastructure, business groups can help foster entrepreneurship in a variety of different ways. ...read more.

More generally, the scale and scope of groups could allow business groups to internally replicate the functions provided by stand alone intermediary institutions in advanced economies. Firms affiliated with business groups, therefore, can benefit from access to these internal institutions to mitigate external markets failures. Group structures also have the capacity to reduce the costs of diversification. While groups themselves are often highly diversified individual firms in each group are typically focused. Therefore the most important role of the groups internal capital market is to launch new ventures, in which both the family and the other group affiliates might acquire ownership stakes. Even though group affiliation can be potentially beneficial, there are also several reasons why the costs of group affiliation may exceed the potential benefits. Khanna and Palepu, in their journal entitled, 'is group affiliation profitable in emerging markets,' explore this view concluding that membership in diversified groups can also be subject to conflicts of interest between controlling family shareholders and minority shareholders. Their research based around India's emerging market shows that family ownership may result in the misallocation of capital by investing cash flow generated by profitable group firms in unprofitable investments, even though this may be in the interest of public shareholders. 1 Global Economic Prospects and the Developing Countries, World Bank, 2002 2 A. Chandler, F. Amatai & T. Hikino (1997) 'Big business and the Wealth of Nations.' 3 Coase R.H (1998) The Firm, the Market , and the Law ...read more.