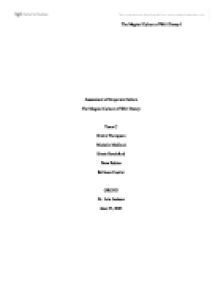 According to Bob Doweling of Business Week, he believes that with

Assessment of Corporate Culture The Magical Culture of Walt Disney Team C Kristie Thompson Michelle McClard Stacie Roachford Dana Edelen Kathleen Coulter ORG502 Dr. Lola Jackson June 27, 2005 Assessment of Corporate Culture The Magical Culture of Walt Disney "Walt Disney transformed the entertainment industry, into what we know today" (internet source www.justDisney.com, retrieved June, 22 2005). The Disney Mission is accomplished through a clear mission statement, and stories and legends that add to the mystical theme of the corporation. Through these and other variables the Walt Disney Corporation has established and maintained a corporate culture that motivates employees and inspires guests around the world. What is the story behind the "magical" culture of the Walt Disney Corporation? Walt Disney's mission and objective is to be a company that has a profound effect on the lives of children and their families around the world. Through a variety of brands and different products and services, Walt Disney seeks to be the most "creative, innovative, and profitable entertainment" (Disney News, 2002) business in the world. Marty Sklar, Vice Chairman and Creative Executive of Walt Disney said, "From the beginning, starting with Walt Disney, we have had five things that make me proud to be part of this Company: high-quality products, optimism for the future, great storytelling, an emphasis on family entertainment and great talent, and passion and dedication from our Cast Members" (Disney Corporate Website, 2003). ...read more.

Walt Disney managers model a leadership style that many other companies are crediting as being the link between quality employee experience and quality guest experience, and inevitably to the success of the business as a whole (Taylor & Wheatley-Lovoy, 1998). Walt Disney World is also known as "the Magic Kingdom". Employees upon being hired are required to go to training classes where they learn, "most importantly...that their job is to create happiness" (Taylor & Wheatley-Lovoy, 1998, p.24). Through the amazing imagination of Walt Disney's story telling we are all able to experience the "magical moments" that have brought us so many characters. "Walt was our bridge from the past to the future" (Walt Disney's Biography, 2, 2005). One organizational activity that occurs at Disney is called "Disney Dimensions, which is a program we run two or three time a year for 25 senior people from every division of the company worldwide" (Wetlaufer, 2000, p. 120). The people who are a part of that program go to Disneyland and learn how to do the jobs of the people at the park like trimming the bushes, working in concession booths, or working in a hotel. They also spend time in other branches of the company. They view many divisions of the company and are not allowed to do their normal jobs for a week. The participants end up leaving the program renewed such that they are able to do their jobs better and with less assistance from their supervisors. ...read more.

posting the position, accepting resumes, conducting interviews, and choosing the best candidate). In keeping with the organizational culture of innovation, quality, community, storytelling, optimism, and decency, Disney incorporates specific selection and replacement policies for the CEO and Board of Directors. Each year, the CEO meets with non-management Directors to discuss potential successors and to develop a written procedure for transferring CEO responsibilities (Disney's Corporate Website, 2003). These written procedures are periodically discussed with the Chairman of the Board and the Governance and Nominating Committee throughout the year. The Disney Board of Directors selects its own members through a screening process assisted by the Governance and Nominating Committee. To combine continuity with new, innovative ideas and experiences, the Corporate Governance Guidelines imposes the following stipulations in which a Board Member must resign: change in current occupation for any given reason, reaching the retirement age of 72, or 12 years of service as a Board Member (Disney's Corporate Website, 2003). Disney is keeping its commitment to being the Happiest Place on Earth by being concerned with the needs of shareholders, as well as customers. More companies are starting to look to the success of Disney and apply some of Disney's philosophies and techniques to their own companies. Disney focuses on organizational processes and a sense of ownership by allowing employees to communicate their ideas about the operations of the company. The constant input of ideas allows Disney to proactively keep up with the ever-changing world. The "Magic" of the Disney is spreading throughout the world. ...read more.