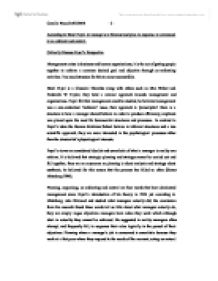 According to Henri Fayol, to manage is to forecast and plan, to organise, to command, to co-ordinate and control. Critically Discuss Fayols Perspective

According to Henri Fayol, to manage is to forecast and plan, to organise, to command, to co-ordinate and control. Critically Discuss Fayol's Perspective Management exists in business and human organisations; it is the act of getting people together to achieve a common desired goal and objective through co-ordinating activities. You need structure for this to occur successfully. Henri Fayol is a Classical Theorists along with others such as Max Weber and Frederick W Taylor; they hold a rational approach towards management and organisations. Fayol felt that management could be studied, he believed management was a non-contextual 'technical' issue, their approach is 'prescriptive' there is a structure to how a manager should behave in order to produce efficiency; emphasis was placed upon the need for bureaucratic structures and processes. In contrast to Fayol's ideas the Human Relations School believe in informal structures and a less scientific approach, they are more interested in the psychological processes rather than the classicalist's physiological interests. Fayol's views are considered idealist and unrealistic of what a manager in reality can achieve. It is believed that strategic planning and strategy cannot be carried out and fail together, they are an oxymoron as planning is about analysis and strategy about synthesis, its believed for this reason that the process has failed so often (Henry Mintzberg 1994). ...read more.

His theory is heavily criticised for being dehumanising and holding a lack of regard for workers psychological needs, which the human relations believe to be of upmost importance. His view is also flawed in that he underestimated the strength of worker alienation. His view is similar to Fayol's in that his methods are reductionist. Having said this, his work has had a major impact upon the manufacturing and productivity levels in the early and mid 20th century and there is still evidence today of 'Tayloristic' practice in business for example McDonalds, factories and call centres where near similar or identical outputs are required on a near-continuous process. The environment of business is a dynamic one, and many people criticise Fayol's 'prescriptive' approach as flexibility and innovation is necessary for business and he doesn't account for this. It is widely believed that the classical school is built upon bureaucratic principles, thus ill equipped to embrace change and are far more suited to repetitive activities and known territory, clearly this is a hindrance as it can make business stale and unexciting. By recognising the need for a dynamic approach organisations have begun to seek people with leadership qualities as opposed to mechanical management or administrative skills. ...read more.

To summarise this theory suggests management practise and other aspects of organisations are dependent upon a variety of internal and external situations. They suggested this is why Taylor's scientific theory and Weber's bureaucratic theory failed as it ignored these contingency factors. The human element in organisational activity is recognised by contingency theorists as a vital influencing factor upon organisations and largely ignored by early classical management theorists. "The best way to organize depends on the nature of the environment to which the organization must relate" (William Richard Scott 2001) Each 'school' of management holds a different emphasis and perspective on how a manager should behave. Management cannot be learned, hence the problem with developing and testing theories, there are conflicting ideas because fundamentally we cannot predict human behaviour. Managers need to recognise that early classical theorists such as Taylor and Fayol remain partially embedded in our collective understanding of management and therefore remain influential in many aspects. They should be aware that a wide variety of styles exist and they might seek to develop flexibility and self awareness if they value and utilise these different styles in different circumstances appropriately. Individuals need to appreciate when leadership qualities such as developing and disseminating are appropriate and alternatively when managerial skills such as negotiation and transaction are required. ...read more.