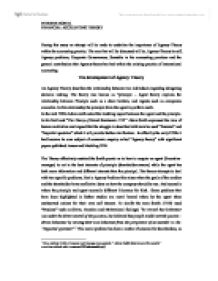 During this essay an attempt will be made to underline the importance of Agency Theory within the accounting practice. The area that will be discussed will be, Agency Theory its self, Agency problems, Corporate Governances, Scandals in the accounting practices and the general contribution that Agency theory has had within the existing practice of international accounting. The development of Agency Theory An Agency Theory describes the relationship between two individuals regarding delegating decision making. The theory also known as "principle - Agent theory explains the relationship between Principle such as a share holders, and Agents such as companies executive. In this relationship the principle hires the agent to perform work. In the mid 1700s Adam smith noted the troubling aspect between the agent and the principle. In his first book "The Theory of Moral Sentiments 1759" Adam Smith expressed the view of human motivation and argued that the struggle is described with term he used "Passions" and "Impartial spectator" which I will provide further clarification. In effect by the early 1970s it had become its own subject of economic enquiry called "Agency theory" with significant papers published Jensen and Meckling 1976. The Theory effectively restated the Smith puzzle as to how to acquire an agent (Executive-manager) ...read more.

It was stated that a presumably unknown person replaced Tylenol Extra-strength capsules with cyanide laced capsules, once sealed and delivered seven people had purchased the item and died within 48hours, at which time Tylenol an alternative for aspirin was the leading product in its field by which they had held 37% of market share (Berge, 1998). The chairman James Burke first strategy guidance was "how to protect the people" and second "how do we save this product"; which resulted in a national recall of every capsule regardless of the financial implications it had. As we measure the true corporate environmental behaviour the company has, we look at how the risk for public safety was regard far higher than their financial growth. With the help of media coverage and sympathy i.e. compensation to the victims family; today the firm has fully recovered and is considered as an examples of how organizations should react, which was demonstrated by taking the decisions to act promptly when confronted with a crisis. Triple bottom line accounting means expanding the traditional reporting framework to take into account the ecological and social performance in addition to the financial performance of the business. This phrase was used by John Elkington in 1994, which was later expanded on in his 1998 book "Cannibals with Forks: the Triple Bottom Line of 21st Century Business". ...read more.

The report chaired by Derek Higgs in 2003 aimed towards corporate governance directed by the UK government. Complimenting the combined code by recommending annual reports as well as suggesting that non executive directors should meet once year without the participation of the directors as this was the purpose of the Higgs report. Overall the contribution of Agency Theory towards accounting practices is quite vast. The relationship developed between two parties is relevant in order to achieve high levels of success just as long as the interests between both are aligned and not at the expense of one another. Accounting practice has a close relation to factors involved within the theory such as information asymmetry. To develop accounting policies to be beneficial on a wider scale, the increase knowledge of the self-interests of the agents may be a reliable source in order to achieve and improve relevant standards and policies. Not only has Agency Theory been an impact on the accounting practices but the effects of Enron and WorldCom and the scandals that occurred have proven to change the accounting practices by which the Sarbanes-Oxley Act 2002 was introduced. With companies moving more gradually towards an understanding of the value created by good corporate governance. ...read more.