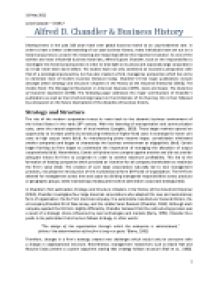 Alfred D. Chandler. The following paper addresses the major contributions of Chandlers publications as well as their shortcomings based on the limitations of his theories; this is then followed by a discussion on the future implications of the discipline

﻿10 May 2012 Julian Spezzati ? 331917 Alfred D. Chandler & Business History ________________ Developments in the past 100 years have seen global business evolve at an unprecedented rate. In order to have a better understanding of our past business history, many individuals have set out on a historical journey to uncover the meaning and reasoning behind this important evolution. As one of the earliest and most influential business historians, Alfred Dupont Chandler, took on the responsibility to investigate this historical perspective in order to shed light on business and especially large corporations as it had never been done before. His studies have not only combined an economic perspective with that of a sociological perspective, but has also created a third, managerial, perspective which has come to dominate most of modern business literature today. Chandler?s three major publications include amongst others Strategy and Structure: Chapters in the History of the Industrial Enterprise (1962), The Visible Hand: The Managerial Revolution in American Business (1977), Scale and Scope: The Dynamics of Industrial Capitalism (1990). The following paper addresses the major contributions of Chandler?s publications as well as their shortcomings based on the limitations of his theories; this is then followed by a discussion on the future implications of the discipline of business history. ...read more.

Economist Richard Langlois presents an interesting alternative to the invisible and visible hand of Smith and Chandler by suggesting a third option: the ?vanishing hand.? (2003) Langlois proposes that as markets develop, they inherently become more complex and require more specialized labor (Ibid). This process of specialization involves technology, organization and institutions, which each evolve at different rates (Ibid). An imbalance in any of these three components creates opportunities to manipulate the environment in a way that is more profitable than simply letting underlying market forces guide decision-making. In the managerial revolution of the early 20th century, the use of vertical integration was an appropriate solution to the imbalances of the institutional and market forces. Although Langlois supports Chandler?s hypothesis in this sense, he stresses that such a solution is only temporary as it is only appropriate for the prevailing circumstances of the era. When these underlying circumstances change, this visible hand suddenly vanishes as the invisible hand returns to its self-regulating activities in the marketplace (Ibid). As markets evolve, technology and institutions tend to develop in such a way as to meet new market opportunities. This reduces the cost of coordinating production and distribution through markets and thus reduces the need for vertical integration (Langlois, 2003). ...read more.

It is only then that business historians will be able to truly determine the key to corporate success and overall economic performance. Business History and the Post-Chandler Era Considered as one of the founders of the business history discipline, Alfred D. Chandler has definitely contributed greatly to this relatively young academic discipline. Since the publication of his first work, Strategy and Structure, Chandler has not diverged much from his original thesis. Even in the face of criticism and a changing environment, Chandler has maintained his original conclusions and built upon them. Although many of his theories present significant limitations, the lack of studies in the field of business history has allowed his work to prosper and be used as the foundations for future researchers to expand upon. Nevertheless, the environment which Chandler based his theories on has changed and is still changing at an unprecedented rate. In the years to come, changes in technology, institutions, and markets may diminish the relevance of some of his work. A new generation of business historians will have to immerse themselves in an era characterized by the rise of service and knowledge economies, with firms becoming increasingly complex and interconnected in a global economy. The future of business history is uncertain: will Chandler?s theories be obsolete in the next 50 years? Only time will tell. ...read more.