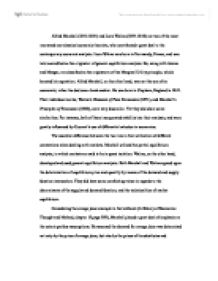 Alfred Marshall (1842-1924) and Leon Walras (1834-1910) are two of the most renowned neo-classical economic theorists, who contributed a great deal to the contemporary economic analysis.

Alfred Marshall (1842-1924) and Leon Walras (1834-1910) are two of the most renowned neo-classical economic theorists, who contributed a great deal to the contemporary economic analysis. Leon Walras was born in Normandy, France, and was later accredited as the originator of general-equilibrium analysis. He, along with Jevons and Menger, are classified as the originators of the Marginal Utility principle; which boosted his reputation. Alfred Marshall, on the other hand, was not the son of an economist, rather his dad was a bank cashier. He was born in Clapham, England in 1842. Their individual works; Walras's Elements of Pure Economics (1874), and Marshall's Principles of Economics (1890), were very dissimilar. Yet they did share some similarities. For instance, both of them incorporated stability into their analysis, and were greatly influenced by Cournot's use of differential calculus in economics. The essential difference between the two lies in their utilization of different conventions when dealing with markets. Marshall utilized the partial-equilibrium analysis, in which markets are said to be in quasi isolation. Walras, on the other hand, developed and used general-equilibrium analysis. Both Marshall and Walras agreed upon the determination of equilibrium price and quantity by means of the demand and supply function intersection. ...read more.

Since most of the comparison between Marshall and Walras has been about their differences, I will now outline some of their similarities, as emphasized by Hicks (Classics in Economic Thought). Cournot has been a major influence on both Marshall and Walras. Both of them read his work, and were introduced to the use of differential calculus in economics by none other than Cournot himself. When observing their individual works, some major fundamentals of Cournot's mathematical economics are present in there. They also share the notion of a well-defined equilibrium, and defined markets to be either in or out of equilibrium. Both of them define competitive equilibrium in the same manner, such that price and price vectors are both defined by the market structure. When determining exchange equilibrium, Walras used two equations. His whole general equilibrium analysis rests on one of these two, which links the equality of demand and supply in certain markets. It is from here that Walras and Marshall seem to go in two different directions. Walras's picture of equilibrium assumes that equilibrium would be attained if at the proposed set of prices demands and supplies were equal. As mentioned earlier, Walras used 'price' as an adjusting mechanism, and so if in the case at hand, demands and supplies do not equal, then according to him price will change continuously until it brings about supply and demand harmony. ...read more.

Although these two are different in many ways, as Hick says in the reader "their ultimate differences are due more to divergence of interest than of technique". Looking at their individual works, one difference clearly stands out. Marshall's focal efforts have been on creating a mechanism that will allow for an easier application to the problems of history or experience. In contrast to Marshall, was interested in inventing principles, which trigger the operation of an exchange economy. Therefore the contribution of William Stanley Jevons, Karl Menger, and Leon Walras was not the mere substitution of a utility for a cost theory of exchange value. Meanwhile, Alfred Marshall amalgamated the best of classical analysis with the new tools of the marginalists in order to explain value in terms of supply and demand. He recognized that the study of any economic concept, like value, is hindered by the interrelativeness of the economy and varying time effects. As a result, Marshall who differed from Walras' general scheme, instead used a partial equilibrium framework, in which most variables are kept constant, in order to develop his analysis on the theory of value. For Marshall a correct understanding of the influence of time and interdependence of economic variables would resolve the controversy over whether it was the cost of production or utility which determines value. ...read more.