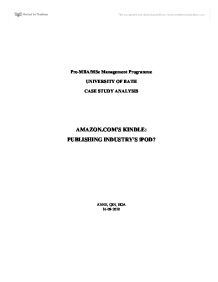 Amazon Kindle Report. After analysing the internal and external situation and position of Kindle in the market, it appears that defects of function, inadequacy of promotion and trouble with price policy are the reasons led to the decreasing of Kindles

Pre-MBA/MSc Management Programme UNIVERSITY OF BATH CASE STUDY ANALYSIS AMAZON.COM'S KINDLE: PUBLISHING INDUSTRY'S iPOD? ANNE, QIN, HOA 16-09-2010 Contents Abstract This report briefly focuses on Kindle, e-reader product of Amazon.com, one of the leading online retailers in the world. Kindle has advantages over other e-readers in many aspects and have become the most popular e-reader since its launch at 2007. However, facing with competition of Sony e-reader and Apple iPad, the market share of Kindle has been decreasing these years. After analysing the internal and external situation and position of Kindle in the market, it appears that defects of function, inadequacy of promotion and trouble with price policy are the reasons led to the decreasing of Kindle's market share. Based on these findings, this report gives recommendations on technology development of device and marketing strategy. Introduction An e-book reader, also called an e-book device or e-reader, is an electronic device that is designed primarily for the purpose of reading digital books. The main advantages of these devices are portability, readability of their screens in bright sunlight, and long battery life. By the turn of 1990s, e-books entered the markets as consumers by large started preferring them over the traditional printed books. In the first decade of the 21st century, new devices for reading, e-readers, entered the markets and threaten the survival of the publishing industry. ...read more.

Facing the development and innovation of technology, the position of Amazon's Kindle would be threatened if there are no measures to maintain its competitive advantages. Consumer Awareness and Purchase Intent Although Kindle takes the biggest market share in e-reader market, people have a plenty of other choices to read books. There is a survey made by Forrester Research about online consumers' awareness, purchase intent, and ownership of Apple iPad, Amazon Kindle, Barnes & Noble Nook and Sony Readers in the US e-reader market (Gelles, 2010). It can be seen from the graph that 25 per cent of respondents never heard of Kindle. Among people who had heard about Kindle, the percentage of people who had intent to buy it is less than 15. The purchase intent of buying a Kindle is lower than to buy e-readers (regardless of brand) and iPad. Amazon.com CEO Jeff Bezos said on annual shareholders meeting in 2009 that advertising is the price you pay for having an unremarkable product or service (James, 2009). This reveals the attitude of the managers towards the promotion. However, 25 per cent of consumer unawareness shows there may be some problems. Problems with Pricing E-books There are more than 670,000 books, newspapers, magazines and blogs, most of which are sold in a lesser price than printed versions by Amazon and their counterparts' e-books. ...read more.

Pursuing $9.99 Pricing Policy After the withholding of MacMillan, luckily there is not any withhold from others publisher. The main point is that customers always looking for product with the reasonable price. When choosing book with different range of price but the same content, obviously, customers will chose the cheaper one. The fact is that e-books sales in Amazon were not affected by MacMillan issue. "Now the company has hit a more significant milestone, selling 143 e-books for every 100 hardcover books sold over the course of the second quarter. The rate is accelerating: For the past month, Amazon sold 180 e-books for every 100 hard covers, and it sold three times as many e-books in the first six months of this year as it did in the first half of 2009" (Twedney, 2010). It is highly recommend that Amazon remain this pricing policy so that it can keep and even attract more customers to its site. Amazon should also keep good relationship with publishing houses by offer better publisher/retailer split than its counterparts or make an effort in promoting not only e-books but also the hard covers. Lastly, Amazon should try to avoid the sudden decision to stop selling books from any other Publisher like what they had done with MacMillan. It had the bad effect on customers' satisfaction on Amazon's service. It may be better to be keen on negotiating and having a final deal that is good for both the company and the publisher. ...read more.