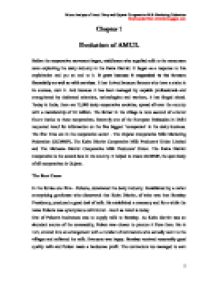 Chapter 1 Evolution of AMUL Before the cooperative movement began, middlemen who supplied milk to the consumers were exploiting the dairy industry in the Kaira District. It began as a response to this exploitation and put an end to it. It grew because it responded to the farmers financially as well as with services. It has thrived because farmers who have a stake in its success, own it. And because it has been managed by capable professionals and strengthened by dedicated scientists, technologists and workers, it has forged ahead. Today in India, there are 75,000 dairy cooperative societies, spread all over the country with a membership of 10 million. The farmer in the village is now assured of a better future thanks to these cooperatives. Recently one of the European Embassies in Delhi requested Amul for information on the five biggest "companies" in the dairy business. The first three are in the cooperative sector - The Gujarat Cooperative Milk Marketing Federation (GCMMF), The Kaira District Cooperative Milk Producers' Union Limited and The Mehsana District Cooperative Milk Producers' Union. The Kaira District Cooperative is the second best in the country. It helped to create GCMMF, the apex body of all cooperatives in Gujarat. The Root Cause In the forties one firm - Polsons, dominated the dairy industry. Established by a rather enterprising gentleman who discovered that Kaira District, of what was then Bombay Presidency, produced a good deal of milk. He established a creamery and for a while the name Polsons was synonymous with butter - much as Amul is today. One of Polson's businesses was to supply milk to Bombay. As Kaira district was an abundant source of the commodity, Polson was chosen to procure it from there. He in turn, entered into an arrangement with a number of contractors who actually went to the villages and collected the milk. Everyone was happy. ...read more.

The plant also has facilities for pasteurizing and packing. It was funded by NDDB. GCMMF's milk is sold under its flagship brand Amul. GCMMF was formed in 1973. As an apex marketing federation of 12 district milk unions of Gujarat to operate own marketing and distribution network in India and abroad. GCMMF sales turnover grew by 21% Rs. 15.5 billion to Rs. 18.8 billion including consignment sales of Rs. 3.7 billion sale of Amul milk in Gujarat and Maharastra increased by 11% and 16% respectively. Dairy product turnover registered a 19% growth. Amul butter registered 18% growth. The sale of Amul & Sagar Ghee increased by 47%. Amul Cheese registered 60% value growth. GCMMF's sales to the defense services were Rs.233 million during the year, were mainly to Burma, Uganda and West Africa. The company plans to expand its export markets in Saudi Arabia and other Middle East countries. During 1999, launching it in 8 states and 2 union territories extended the Amul ice-cream brand franchise. Amul ice creams have become India's 2nd largest brand. Recently it has commissioned a dairy at Kolkata. New products launched during the early 2000 were Amul Pizza, Cheese and Amul slice cheese, Amul paneer and Amul Mithaee range. Safal mango drink has been launched by Strategic alliance with Safal (A union of NDDB). The product range to be launched under the Safal brand will include fruit drinks, squashes, pickles, jams, and ketchup and mango pulp. Amul ice-cream brand franchise was extended with launch in 8 states & 2 union territories. Amul ice cream has become the 2nd largest brand in the country & has garnered major share in its existing markets in a short time span of 3 years. Amul's main ice-cream manufacturing facility is located at Gandhinagar which is Asia's largest and most modern integrated ice-cream manufacturing plant and uses world renewed refrigeration units and an efficient cold chain. ...read more.

a firm must be analyzed in relation to its industry. Factors outside the industry tend to influence all the industry's firms in the same way and are thus not as important to study. * To a large extent, industry structure governs the strategies open to the firms. The profitability and attractiveness of an industry is dependent of the level of competition. Competition in an industry originates from industry structure and goes well beyond the behavior of individual competitors. * According to Porter, each industry has a potential profitability and the profitability for the firms is dependent on the competitive forces in the industry. Porter identifies five competitive forces that derive from the ambition to obtain as large share of the profitability as possible. The five forces are the foundation of the five-force model. Porter's Five-Force Model * The major competitors of the Amul dairy include: Milk Gayatri Royal Sardar Uttam Shreshtha Ice Crean Vadilal Havmor Kwality Walls Max Local & Regional players Ghee Gayatri Nestle Milk Powder Nestle Chocolate Nestle Cadbury The success of the national and local competitor's brands includes effective distribution system, advertising, good pricing policy etc. The factors ascribed by porter are: * Threats of new entrants * Bargaining power of suppliers * Bargaining power of buyers * Rivalry among competitors * Threats from substitutes These factors can be explained in context to GCMMF as below: Threats of New Entrants * Economies of Scale: GCMMF enjoys economies of scale, which is difficult to match by any other competitor. It is because of this reason that no regional competitor has grown to a national level. * Cost and Resource advantages: Amul dairy is co-operative society. That means "cooperation among competitive" is the fundamental principle. Amul dairy is managed under the norms of GCMMF and market the products under the brand name 'Amul', which has a very good reputation at domestic and international level. Here, the raw material procurement is very difficult for the new entrants. Consequently Capital requirement is also high. Still new entrants are emerging such as domestic and international players. So the threats of new entrants are moderate. ...read more.