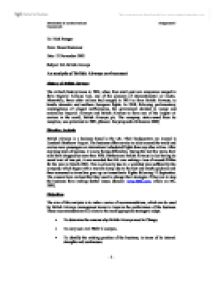 An analysis of British Airways environment

To: Nick Pronger From: Bruno Hautcoeur Date: 12 November 2002 Subject: BA-British Airways An analysis of British Airways environment History of British Airways The airline's history traces to 1924, when, four small post-war companies merged to form Imperial Airways Ltd., one of the pioneers of intercontinental air routes. Meanwhile, three other airlines had merged in 1935 to form British Airways, to handle domestic and northern European flights. In 1938, following parliamentary investigations of alleged inefficiencies, the government decided to merge and nationalize Imperial Airways and British Airways to form one of the largest air carriers in the world, British Airways plc. The company, state-owned from its inception, was privatized in 1987. (Source: Encyclopaedia Britannica 2000) Situation Analysis British Airways is a business based in the UK. Their headquarters are located in London's Heathrow Airport. The business offers service to cities around the world and carries more passengers on international scheduled flights than any other airline. After enjoying years of success, it is now facing difficulties. During the last few years, their sales have dropped by more than 10%. Furthermore British Airways is also having its worst level of loss yet, it was recorded that BA was making a loss of around �200m for the year to March 2002. This is primarily due to a wretched year suffered by the company, which began with a tourism slump due to the foot and mouth epidemic and then worsened as travellers gave up on transatlantic flights following 11 September. The owners have realised that they need to change their strategies if they are to stop the business from making further losses. (Source: www.BBC.com, article on BA, 2001) Objectives The aim of this analysis is to make a series of recommendations, which can be used by British Airways management teams to improve the performance of the business. ...read more.

They focused on a Middle East conflict because it could affect the way British Airways operates which could mean more cutting programs. Ecological Another key aspect is the ecological factors which are part of British Airways external environment. The public is now becoming more and more aware of the ecological factors. Such factors often take the form of pollution, such as that of air, water, ground, and noise pollution. British Airways must ensure it is not making to much pollution. * Emissions and fuel efficiency Every aircrafts have powerful turbot engines which reject a fairly high level of pollution into the air when flying. The impacts of aviation on the atmosphere are now taking over from noise as the main environmental issues faced by all airlines. * Noise Pollution Noise is produced by nearly every form of transportation, although the levels and impacts can vary widely. Noise from aircraft has been established as a significant source of pollution, although it is typically confined to areas in the immediate vicinity of an airport. The principle exceptions to this are the Concorde aircraft when it is cruising at supersonic speed and helicopters, which produce potentially substantial levels of noise over areas of flight. Sociocultural British Airways will need to measure any social changes affecting their business, which may affect the demand for flights. For example, since the terrorist attack on the 11 September 2001 and other events such as the foot and mouth crisis have had a big impact on British Airways sales mainly because the customers are becoming more or less afraid to fly on transatlantic flights and perhaps domestic flights. Technological British Airways can be affected by a change in technology. ...read more.

The diagram below represents all the stakeholders. Conclusion In this report the author has analysed the environment of BA as a whole. Having conducted all the analysis, the writer has come to a conclusion that whatever strategy or combination of strategies BA choose to have, BA needs to find a way of getting back on their feet. British Airways have years experience in the civil aviation industry and until recently have been successful. They have built their reputation as a British and quality airline. This would enable them to build on their strength rather than taking the risks involved with alternative strategies. The business could in the short term reduce its workforce in order to lower their expenses, and wait to see if the global travel industry improves. However in BA's opportunities, it is suggested that the e-business is one good way for BA to cut down its costs. The increase in the popularity of the use of internet by the public clearly offers BA an opportunity to improve their performance. Recommendations Having considered the possible strategies the author would recommend that the business reduces the workforce in the short term, then make good use of the e-business and continues to analyse its external environment before making any long term commitment such as the purchase of new lager aircrafts. The business has had many years of success as an airline and should only abandon this strategy if it is certain that it has no alternatives but change. Once things have settled down that the travel industry and the economic climate improves, the British Airways may find that demand will begin to increase again. Furthermore whilst British Airways waits to see how things improve, the writer would also recommend that it compiles more research into the other possible strategies it might be considering in the future. ...read more.