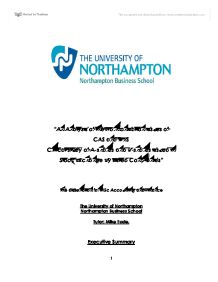 An Analysis Of harmonization issues of accounting standards

"An Analysis of the Harmonization issues of CAS and IFRS Critical study of A-shares and B-shares issued in Stock Exchange By Listed Companies" The dissertation for MSc Accounting and Finance The University of Northampton Northampton Business School Tutor: Mike Eade. Executive Summary In the era of globalization with open worldwide economic system, cross-border economical activities are raising day by day. Such increased level of economic activities, is a reason to motivate the harmonization amongst the countries worldwide. In beginning of 2005 Australia, EU had introduced IFRS, and other countries like Russia , New Zealand had also announced steps towards adapting the IFRS by different means,, which had swept through out globally towards international harmonization of various accounting Standards. At the same period of time, it's also can be noticed that each country is paying attentions to study carefully towards the harmonization and coordination of the differences between national and international accounting standards. It is noticeable that, the harmonization among the accounting standards are getting irresistible trend as China is getting involved the international economic system, increasingly. Both in professional and academic sphere, harmonization of Financial Reporting Standard (IFRS) and China Accounting Standard (CAS) are catching a major attention towards it. This paper will be widely examined the difference between these two standards from theoretical and empirical outlook. The first chapter of the paper will be analysing the formal differences between IFRS and CAS, indicating the fact that in whether terms of structure, specific provision or item number are concerned, IFRS is much more established than CAS. But also taking it in consideration that the differences are much more narrowed, after the 20 new accounting standards were planned to issue at the end of 2006. The next session the paper will be comparing the formal differences by the examination of the companies' financial reports which simultaneously issue A-shares and B-shares in the stock exchange. ...read more.

On November 7, 2001 The China Securities Regulatory Commission (CSRC) had issued, 'Financial Reporting Differences and Disclosures based on the Domestic and International Accounting Standards'(CSRC [2001] No. 60), shows that: the companies which are listed should always treat the financial reports in accordance to CAS as the foundation, and treating the net assets and net profits in the financial reports as an adjustment target to prepare an adjustment sheet showing and explaining the differences, which must be disclosed as it indicates on the note for the financial report in accordance to CAS. At the moment, there is a form of the special listed companies, which are issuing A-shares as much as the B-shares also, simultaneously. As in according to the provision of China's information disclosure, there is a need for the listed companies, which are simultaneously issuing A-shares and B-shares, must provide two different copies of the financial information in accordance to CAS and IFRS, that the investor of both A and B shares will be able to receive the two copies of the financial reports and two different financial information at the same time. That is why this paper will focus on the differences between the financial information based on CAS and IFRS, of the listed companies which are simultaneously issuing A-shares and B-shares. 3.3 Research Procedure The paper is going to use a number of integrated methods and theories, such as management science, economics and also statistics and so on, in relation to China and some relevant foreign studies and researches based on a very in-depth study on the significance at CAS and IFRS, to provide a comparable analysis between both accounting standards. The paper is going to analyze the founding step by step as shown below: Chart 3-1 Idea of Research 3.4 Research Structure In the research, as a starting point for the research we will be using the comparable differences of IFRS and CAS to carry out the research to analyse the harmonization issues of accounting standards. ...read more.

We also can conclude that, although if CAS fully adopts IFRS, it still will not be able to increase the content of financial information, and investors need to consider both financial information in accordance to CAS and IFRS, therefore it is necessary to disclose the financial information under IFRS when the financial information base on CAS is disclosed. Finally, with help of the contrast analysis and by conducting an empirical research, we can find that there are certain systematic differences between CAS and IFRS. Differences in accounting standards affect both net profit and net assets reporting of listed companies, and also affect net profit more significant way. In some cases, the differences can bring an enormous influence to specific companies (which have been called abnormal samples in this paper). As it's seen from the trend of change of the past six years, the influence on financial information disclosure has weakened, which indicates that the differences between CAS and IFRS have been narrowed down, and that net profit calculated with CAS is becoming more and more prudent than IFRS. The conclusion indicates that the China has made a remarkable performance towards the globalization of accounting standards through the continuous reform. And also indicates that CAS is moving towards IFRS. 5.2 Recommendations As the recommendation, the paper would like to suggest that harmonization doesn't indicate there is no difference. The difference exist their objective, although it is changing and to certain extent it will be narrowed down continuously. However, we need to view the difference in a scientific way. At the same time, we should also treat the different differences in the different way: for temporary differences, we should take the accept mechanism as EU; for permanent differences, corresponding supporting system need to be constructed. In addition, the efforts from both sides are equally needed towards the international harmonization of the accounting standards. We should communicate with, learn from and accept each others constantly. ...read more.