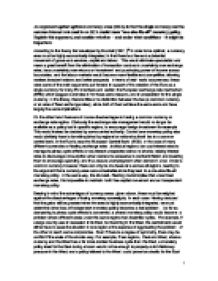 An argument against optimum currency areas (OCA) is that the single currency and the common interest rate used in an OCA would mean one-size-fits-all monetary policy. Explain this argument

An argument against optimum currency areas (OCA) is that the single currency and the common interest rate used in an OCA would mean "one-size-fits-all" monetary policy. Explain this argument, and consider whether - and under what conditions - it might be important. According to the theory first developed by Mundell (1961)[1] in order to be optimal, a currency area must be highly economically integrated, in that there is a free and substantial movement of goods and services, capital and labour. This would eliminate speculation and mean a great benefit from the elimination of transaction costs and uncertainty over exchange rates, less uncertainty over returns on investment and purchasing power of income across boundaries, and the labour markets would become more flexible and competitive, allowing workers broader horizons and better prospects. In terms of real- world occurrences, these were some of the main arguments put forward in support of the creation of the Euro as a single currency for many EU members and earlier, the European exchange rate mechanism (ERM) which pegged currencies in for these same reasons, and in preparation for the single currency. In the theory, there is little or no distinction between the two (a common currency or an area of fixed exchange rates), since both of them achieve the same ends and have largely the same implications. On the other hand there are of course disadvantages to having a common currency or exchange rate regime. ...read more.

In these scenarios, ceterus paribus, it would be beneficial have separate currencies for the East and West. Thus we can see that where gains are greatest when an area is highly economically integrated whilst the stability loss from losing autonomous monetary policy is lessened. These principles are illustrated below. On the left, the GG schedule showing the efficiency gains of joining a currency area increasing as the degree of integration in the area increases. On the right, the LL schedule shows the economic stability loss diminishing as economic integration increases. Putting the two together, as below, we see there is an intersect where as integration increases, the total gains begin to exceed the losses. It is also important to note in instances such as the Euro the limiting effect that the loss of monetary autonomy can have on fiscal policy, since segniorage can no longer be used to fund public sector deficits. This limits the extent to which fiscal policy can be used to counterbalance cyclical or random shocks although it could be seen in a positive way in that it might force governments to be more disciplined with their spending. Depending on the political climate of the country, this limitation could prove important in deciding whether or not to join. Given the requirement of extensive integration for a currency area's monetary policy to be fair and effective, applied work on optimal currency areas tends to focus on identifying actual optimal currency areas based on empirical evidence and determining if these correspond with existing currency regimes. ...read more.

However, the issue of monetary policy becomes redundant when the currency area is truly 'optimal', a flexible labour market would mean that workers could readily move throughout the entire area to find employment and meet the needs of the economy preventing structural unemployment, free movement of capital would ensure that surpluses and deficits of various forms of capital would not arise and would instead be allocated efficiently and substantial trade within the area would bring about the 'law of one price'. There would be a symmetrical business cycle across the area and inflation and unemployment rates would converge. Thus the area, when 'optimal' or highly integrated, would suffer no stability loss and a single monetary policy genuinely could fit the entire area. The reality, as mentioned with respect to the US and Europe, is likely to be somewhere in between the two extremes, either resulting in a situation in which the efficiency gains are outweighed by the stability losses or one in which stability losses do occur, but are justified on balance by the gains, in which case the best course of action is probably to persevere and encourage more economic integration in order to improve stability. It is also important to remember, as Mundell pointed out in his original article, that these are the purely economic arguments and in reality, political considerations about the importance of monetary autonomy to national sovereignty are likely to play a part in real-world decision making. ...read more.