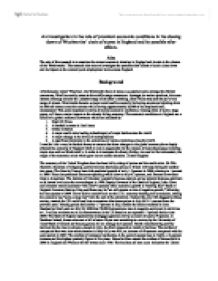 An investigation in the role of prevalent economic conditions in the closing down of Woolworths' chain of stores in England and its possible after effects. Aim The aim of this research is to examine the current economic situation in England and its role in the closure of the Woolworths'. The research also aims to investigate the possible after effects of such a close down and its impact on the economy and employment levels across England. Background Affectionately called 'Woollies', the Woolworth chain of stores is a popular name amongst the British consumers. Woollies mainly caters to the middle range consumers. Amongst its various products, the more famous offerings include the Ladybird range of children's clothing, Chad Valley toys and the pic'n'mix range of sweets. Woolworths became a major news headline recently for having announced shutting down its 800 odd stores across the country while leaving approximately 26,000 of its employed staff, unemployed. This quite important in terms of current economic conditions. Closing down of such a large group, will have a major impact on the already failing economy. The economic conditions in England are a reflect of a global economic downturn which are indicated by 1. High Oil Prices 2. A marked increase in food items 3. Global Inflation 4. A major credit crisis leading to bankruptcy of major banks across the world 5. A major change in the levels of unemployment 6. ...read more.

While its retail deposit business along with its branch network will be sold to Santander. The mortgage book, personal loan book, headquarters, treasury assets and its wholesale liabilities will be taken into public ownership. By November 2008, unemployment had risen to over 1.8 million and is projected to surpass 2 million by Christmas and perhaps even as high as 3 million by 2010.From the 1st of December 2008, the UK Government made the decision to cut VAT from 17.5% to 15% for 13 months in an attempt to encourage a big spend from UK shoppers before Christmas. On 4 December 2008, the Bank of England cut interest rates from 3% to 2%, which amounts to the lowest level since 1951. The above incidents helped shape the future of Woolworth's Early on 19 November 2008, The Times first reported that the Woolworths' retail business was a target for restructuring specialist Hilco, who would buy the retail arm for a nominal �1; this was confirmed later the same day. This deal would have left Woolworths Group with its profitable distribution and publishing businesses and a reduced debt load. The group's banks, GMAC and Burdale, rejected the deal and recalled their loans, forcing the group to place the retail business and Entertainment UK Ltd into administration. Neville Kahn, Dan Butters and Nick Dargan of Deloitte & Touche LLP were appointed joint administrators. When the company entered administration it had a debt of �385 million. ...read more.

Nervous suppliers, landlords and investors have all drawn up lists of the most leveraged retailers. But for now - in the immediate aftermath of Woolworths collapse - rival retailers and investors have to calculate what effect the failure of one of the UK's biggest retailers could have on an already fragile high street. Fears are growing that in an attempt to extract as much cash as possible - and avoid being left with piles of unsold stock - the group's administrators could discount heavily in the run up to Christmas. Great news for consumers - but a further headache for retailers, which have already been forced to slash prices in an attempt to engineer some Christmas trade. In a note to clients last week, Sanjay Vidyarthi, retail analyst at Dresdner Kleinwort, warned: "Were Woolworths Retail to be put into administration, the consequences for the rest of the high street could be significant, given Woolworths has sales of �1.7bn."Short term, if the business is run for cash, this could adversely impact the likes of Game, WH Smith and HMV. Longer term, with some capacity exiting the market, it could benefit these three. Possible Issues with the proposed methodology The methodology does not take into account the prevalent socio-economic conditions of the current environment. While these factors do not directly influence the current situation, they are indirectly affecting the outcome. The war in Iraq while not considered in this situation, does affect the present economic situation and hence might contribute to the closing down of Woolworths' stores. Hence the predictions made by this research might not be as accurate as originally hoped for. ...read more.