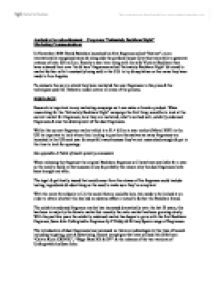 Analysis of an Advert

Analysis of an advertisement - Fragrance "Intimately Beckham Night" Marketing Communications In November 2006 David Beckham launched his first fragrance called "Instinct", as an internationally recognised name & along side the perfume house Coty they were able to generate revenue of over �20 million. Exactly a year later along with his wife Victoria Beckham they have released their own 'his & hers' fragrances called 'Intimately Beckham Night' & intend to market further with it eventually being sold in the U.S to try & capitalise on the move they have made to Los Angeles. To evaluate the way in which they have marketed the new fragrances in the press & the techniques used the Rabostic model covers all areas of the process. RESEARCH Research is important in any marketing campaign as it can make or break a product. When researching for the 'Intimately Beckham Night' campaign the first thing would be to look at the current market for fragrances, how they are marketed, what's worked well, celebrity endorsed fragrances & also the development of the dual fragrances. Within the current fragrance market which is a �1.4 billion a year market (Mintel 2007) in the UK its important to look where their looking to position themselves as many fragrances are launched in the UK each year & many fall away because they've not researched enough & put in the time to look for openings. ...read more.

BUDGET With the increase of fragrance launches in the past few years and in particularly celebrity fragrances the amount of money that is being sent on advertising and launching a product has increased. An example of this spending can be seen in the research by Mintel into the amounts spent. See Appendix D - Table of Expenditure With the large amounts of money being spent it highlights the need to make sure adequate research & planning goes into launching as if it goes wrong can have impact on finances. OBJECTIVES The objectives that they will be looking to achieve from the campaign & launch of the new fragrances will be to increase the market share to which the celebrity market has, also create a good share of the dual fragrance market that they are entering & take the Beckham name more global. With the introduction of the fragrance they will be looking to make an impact with fragrance market & look at ways to utilise the product life cycle. As the name of the fragrance is "night" there is an emphasis that the fragrance is meant to be used at night & for going out, this can be seen thought eh advertisement as the Beckham's are both dressed up & the imagery is very dark to give the impression its night time. ...read more.

With the Beckham's appearing in many celebrity magazines & in the newspapers near enough everyday they will also benefit from the Free PR that they get, around the time of release the Beckham's featured even more than usual because of there move to Los Angeles, David's football career with England resurrecting & the couple being seen regularly with other big names like Tom Cruise, Will Smith, etc, all of which are good press for the couple. Other ways in which they could further implement the fragrance are samples of the fragrance giving the audience something tangible, the couple promoting it in the press & maybe even do a publicity stunt creating more buzz around them, something they have done it the past successfully. CONTROL With any campaign its important to make sure that there is control & that continual evaluation is done on the product against its targets. To make sure that if improvement is needed or it can be implemented better I.e. - placing the advert or pricing it lower, then this is done, alternatively if the product is doing well look at possible ways to embellish this. Having accessed the different aspects of the marketed the new fragrances & the processes involved it is evident that a lot of work is involved in the launch of a new product and that the implementation could mean either the success or failure of a product. ...read more.