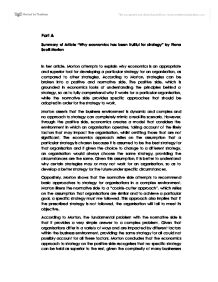 Analysis of case study &quot;Why Economics has been a fruitful for strategy&quot; by Fiona Scott Morton

In her article, Morton attempts to explain why economics is an appropriate and superior tool for developing a particular strategy for an organization, as compared to other strategies. According to Morton, strategies can be broken into a positive and normative side. The positive side, which is grounded in economics looks at understanding the principles behind a strategy, so as to fully comprehend why it works for a particular organisation, while the normative side provides specific approaches that should be adopted in order for the strategy to work.

Morton asserts that the business environment is dynamic and complex and no approach to strategy can completely mimic a real-life scenario. However, through the positive side, economics creates a model that considers the environment in which an organisation operates, taking account of the likely factors that may impact the organisation, whilst omitting those that are not significant. The economics approach relies on the assumption that a particular strategy is chosen because it is assumed to be the best strategy for that organisation and if given the choice to change to a different strategy, an organisation would always choose the same strategy, providing the circumstances are the same. Given this assumption, it is better to understand why certain strategies may or may not work for an organisation, so as to develop a better strategy for the future under specific circumstances.

Oppositely, Morton shows that the normative side attempts to recommend basic approaches to strategy for organisations in a complex environment. Morton likens the normative side to a “cookie-cutter approach”, which relies on the assumption that organisations are similar and to achieve a particular goal, a specific strategy must me followed. This approach also implies that if the prescribed strategy is not followed, the organisation will fail to meet its objective.

According to Morton, the fundamental problem with the normative side is that it provides a very simple answer to a complex problem. Given that organisations differ in a variety of ways and are impacted by different factors within the business environment, providing the same strategy for all could not possibly account for all these factors. Morton concludes that the economics approach to strategy on the positive side recognises that no specific strategy can be held as superior to the rest, given the complexity of many businesses and the environment. Therefore, the economics approach seeks to understand the impact for these factors, so as to provide a strategy that tailored for each unique organisation.

Groat (2002) describes positive theory to developing a strategy as “descriptive and explanatory systems that identify links and predict future behaviour, [while normative theory] includes a wide range of concepts that belong to the realm of convention or rules of thumb.” In essence, a positive approach to strategy looks at the strategy currently in place without passing judgment on whether that strategy is correct or not, but instead improves the strategy based on future events. On the other hand, normative approach looks at the way things should be and develops strategies to achieve that objective.

In politics, the normative and positive approach to strategy can be used to develop government policies.  Musgrove (1959) notes that a normative approach in formulating policies identifies specific government objectives that should be carried out and designs policies for achieving those objectives. Oppositely, Cordes (1997) explains that “a positive standpoint seeks to explain why existing policies are pursued and predict which policies will be pursued in the future.” Each approach has its benefits; a normative perspective has the advantage of providing a clear cut approach to developing policies, which can save time. On the other hand, a positive approach helps to forecast what future policies may be required, thus providing policies that may be more applicable to the current environment.

In psychology, the normative and positive theories can also be applied psychotherapy. Encyclopaedia of Children and Childhood in History and Society (2008) notes that Arnold Gesell, was a pioneer in the field of psychology with regard to the applying normative approach to the development of children. Through the normative approach Gesell defined patterns of mental development in children and used this information to development treatment for children who did not fit this pattern. However, the positive approach to child psychology tries to understand why a child may not develop in the same way as his or her peers and subsequently recommend ways of fostering future development, which may or may not be similar to the development of similar children within that age range.

According to the Oxford Dictionaries (2006), a model could be described as “a description or reproduction of observed or predicted behaviour of some system, simplified by ignoring certain details. Models allow systems to be understood and their behaviour predicted.” In essence, models replicate possible real-life scenarios, which can help predict future outcomes. Common models in strategic planning include Scenario Analysis, PESTEL Analysis and Porter’s Five Forces Framework.

12Manage (2010) describes scenario analysis as “a model that analyses possible future events by considering alternative possible outcomes. This analysis is designed to allow a more complete consideration of the outcomes and their implication.”  According to Grant (2005), the main advantage of scenario analysis is that it helps businesses plan for possible future situations, therefore reducing the uncertainty. Scenario analysis can be done be creating basic scenarios ranging from best to worst or through the use of probability diagrams that attach probabilities to specific outcomes. To implement scenario analysis on a much larger and more complex scale, computer generated models such as the Monte Carlo Simulation can be used to test a large number of random scenarios.

David (2008) explain that PESTEL Analysis involves studying different factors within the macro-environment that affect businesses, which include political, economic, social, technological, environmental and legal factors. These factors may impact the success or failure of particular strategy, due to their interdependence and the rates at which they change. A business can analyse each factor within its environment, which can be a particular country or region, etc and develop an understanding of how they will change in the future. Like scenario analysis, when business account for these changes within the macro-environmental, they can plan for their future impact.

Johnson & Scholes (2008) note that Porter’s Five Forces Framework is commonly used to analyse industry attractiveness by examining 5 forces/elements within the industry, which include the threat of new entrants, threat of substitutes, bargaining power buyer, bargaining power of suppliers and competitive rivalry. Porter’s model maintains that industries are not attractive when these forces are high. Through the use of the Five Forces model, businesses are better able to understand the industry in which they operate or intend to operate and therefore are able to better develop strategies relating to each element, such as pricing.

According to Morton, to use a cookie cutter approach to strategy relies on choosing an easy and somewhat simplistic approach to develop strategies. This approach emphasizes homogeneity by creating standardized strategies for businesses.  Morton believes that this simplistic approach can not develop effective strategies because the process of creating a strategy is complex and it involves understanding businesses and their environment, which are in themselves extremely complex and dynamic. Morton also asserts that because the cookie cutter provides a standardized approach it cannot accurately develop strategies for businesses since all businesses differ in some way regardless of which industry the operate.