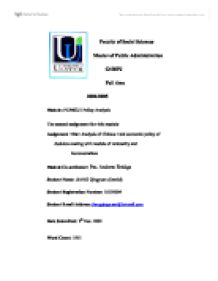 Analysis of Chinese rural economic policy of decision-making with models of rationality and incrementalism.

The number of the behaviour of alternatives he must explore is so great and the information he would need to evaluate them so vast that even an approximation to objective rationality is hard to conceive (Simon, 1947). Secondly, of the amount of new information generated by our environment, our senses filter out 99% before it reaches our consciousness. Given these facts, human behaviour is in most cases restricted to satisfy behaviour. Rationality is thus bounded by the complexity of the world we live in relative to our cognitive abilities. It seems intuitively obvious to the casual observer that rationality is more descriptive of the way people with modest computational abilities make decisions, stay alive, and even thrive (Simon, 1947). The decision-making process of Mao's Agricultural Reform ignored numbers of important information, which was productivity and finance limited, especially some uncertain elements, such as the withdrawal of Soviet assistance. Deng's Agricultural Reform Comparing with Mao's failure, another leader of China - Deng Xiaoping achieved extremely successes in agricultural reform from the late of 1970s. Mao's failure just like a mirror make Deng have awareness clearly that the road of China's agricultural development will be extremely difficult and uneven for the reality of lower level of productivity and serious inadequate resources of information and technology. ...read more.

Therefore, the question for decision-makers possibly would be "what steps can be taken in the general direction" rather than "what are the particular steps that are the best means to a specific objective" (Lindloom, 1979 ). Conclusion According to analysing the policy of decision-making in China, we can conclude that decision-making is absolutely worthy to be considered in the whole policy process for different decisions leading to different consequences. Indeed there is no completely correct answer to the question - which method produces better decision. Theoretically, rationality and incrementalism are acceptable and feasible if decision-makers possess adequate wits and resources to meet preconditions. In real life, making perfect decision in policy process is really difficult to any policymakers for their distinct personalities and other complicated situations including internal and external elements. However, whichever approach is used, certain pitfalls need to be avoided. These include: avoiding misplaced priorities due to unclear goals; avoiding confusing the public interest with that of the special interest or constituency; avoiding overly rigid adherence to rules; the oversimplification of reality; the over-quantification at the expense of qualitative factors; and, the reluctance to engage in policy and program evaluation and feedback (Dunn, 1981). Therefore, policymakers should be flexible to take advantages of the methods above in the process of decision-making according to the particular circumstances, in case of dropping into pitfalls unconsciously (Bachrach, 1963). ...read more.