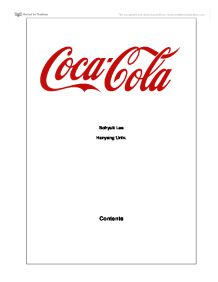 Analysis of Coca Cola. Coca-Colas vision serves as the framework for their Roadmap and guides every aspect of their business by describing what they need to accomplish in order to continue achieving sustainable, quality growth.

Bohyuk Lee Hanyang Univ. Contents I. About Coke 1. History of Coca-Cola 2. Mission, Vision, Values 3. Major Goal 4. CEO, Muhtar kent 5. Stage of lifecycle & SWOT 6. 5 Forces analysis & 4 Building blocks ?. Strategies 1. Coca-Cola product's differentiation 2. Glocalization strategy in Coca-Cola 3. Vertical integration of Coca-Cola 4. Related diversification of Coca-Cola 5. Unrelated diversification of Coca-Cola ?. Implementing Strategy 1. Corporate Performance, Governance, and Business Ethics 2. Implementing Strategy I About Coke 1. History of Coca-Cola In May, 1886, Coca Cola was invented by Doctor John Pemberton a pharmacist from Atlanta, Georgia. John Pemberton concocted the Coca Cola formula in a three legged brass kettle in his backyard. The name was a suggestion given by John Pemberton's bookkeeper Frank Robinson. Being a bookkeeper, Frank Robinson also had excellent penmanship. It was he who first scripted "Coca Cola" into the flowing letters which has become the famous logo of today. The soft drink was first sold to the public at the soda fountain in Jacob's Pharmacy in Atlanta on May 8, 1886. About nine servings of the soft drink were sold each day. Sales for that first year added up to a total of about $50. The funny thing was that it cost John Pemberton over $70 in expenses, so the first year of sales were a loss. Until 1905, the soft drink, marketed as a tonic, contained extracts of cocaine as well as the caffeine-rich kola nut. By the late 1890s, Coca-Cola was one of America's most popular fountain drinks. With another Atlanta pharmacist, Asa Griggs Candler, at the helm, the Coca-Cola Company increased syrup sales by over 4000% between 1890 and 1900. Advertising was an important factor in Pemberton and Candler's success and by the turn of the century, the drink was sold across the United States and Canada. Around the same time, the company began selling syrup to independent bottling companies licensed to sell the drink. ...read more.

Their brand name of over 3,300 beverages has from A to Z and divided by "region", "drink type", "location" and "brand of beverages". There are many kinds of products as water, juice and even coffee, gum, game program celebration. Until now, Coca Cola is launching many different products and also activities program in many countries. 2009 in North American, they sell "90 calorie "mini can" . In Africa, they provide $30 million commitment to provide access to safe drinking water and sanitation to at least 2 million Africans by 2015. November 2009, Coca Cola introduced plant bottle, a new 100% recyclable plastic bottle from up to 30% plant-based, renewable material. They are being piloted with Dasani and Coca-Cola products in Denmark, Japan and North America. Coca created more than 3,000 local to distribute Coca-Cola products in Africa, and make up 13,500 employments. In Japan, Coca Cola sell "Georgia Green Planet Caf� Au Lait". Every bottle sold will purchased 1 kilogram of carbon dioxide, offsetting an estimated 2,900 metric tons of them emissions in Japan in 2009. Coca-Cola strategy is not only open wide coca cola differentiation products but also make their products and company images better in their consumer everywhere in the world. 2. Glocalization strategy in Coca-Cola 1) What glocalization means? A combination of globalization and localization; it means a product or service that is developed and distributed globally, but is also fashioned to accommodate the user or consumer in a local market. 2) The change of strategy At the first time, Coca-cola pursued the standalization strategy based on globalization. In standalization, Coca-cola used franchise system and the same strategies from head office. This strategy could give Coca-cola good change to get economies of scale, but there was some limitations ; they didn't consider what consumers in each country need. So, Coca-cola changed their standalization strategy to localization. In localization, Coca cola tried to combine brand image with local culture and characterized the number one brand image. ...read more.

As stated previously, the company has been trying to change the culture by allowing employees to essentially shape and reform the goals of The Coca-Cola Company. The positive stories that the company chooses to focus on provide a foundation to encourage employees to be not only model workers, but model citizens. 4) Strategy across Countries The Coca-Cola Company's strategy has changed frequently over time. At first, it settled for localization strategy until 1980's. It was hard to control every distribution which was located in more than 200 nations, so Coca-Cola chose to grant local operations a high degree of independence. However, this resulted in falling sales in many local operations that did not have skills and know-how of effective management. Therefore the new CEO of 1981, Roberto Goizueta pushed global standardization strategy by centralizing main activities at the headquarters. The Atlanta operation, which was set as headquarters exerted more control over each local operations and pursued 'one-size-fits-all-strategy' ideology. Not long time later, Coca-Cola was losing against local competitors who had better suited marketing plans and product developments that attracted local consumers. In 2000, Coca-Cola went through another shift in strategy. Again, it allowed autonomy of local operations and let local directors to be in charge of all functions. Decentralization was the key idea but the falling growth rate did not soar as the board of directors had expected. Regardless of localization strategy, Coca-Cola still lacked SOMETHING. Meanwhile Neville Isdell became the new CEO of Coca-Cola and he reviewed all the strategies that were formerly implemented. He came to a conclusion that localization should be done with partial centralization of key departments and faster customer responsiveness. So it finally chose to implement transnational strategy that differed price, product offerings, and marketing but kept headquarters to be in charge of other long-term planning. In addition, Isdell stressed communication of good ideas across each division as well as each nation. Coca-Cola Company, therefore, adopted technological mechanism that is connected worldwide and were able to seek advantages of localization and global standardization. ...read more.