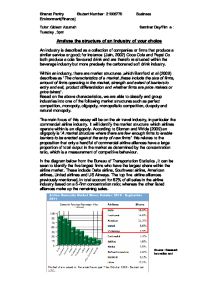 Analyse the structure of an industry of your choice

An industry is described as a collection of companies or firms that produce a similar service or good; for instance (Jain, 2002) Coca Cola and Pepsi Co both produce a cola flavoured drink and are therefore situated within the beverage industry but more precisely the carbonated soft drink industry.

Within an industry, there are market structures ,which Bamford et al (2009) describes as ‘The characteristics of a market ,these include the size of firms, amount of firms operating in the market, strength and extent of barriers to entry and exit, product differentiation and whether firms are price makers or price takers’.

Based on the above characteristics, we are able to classify and group industries into one of the following market structures such as perfect competition, monopoly, oligopoly, monopolistic competition, duopoly and natural monopoly.

The main focus of this essay will be on the air travel industry, in particular the commercial airline industry. It will identify the market structure which airlines operate within is an oligopoly. According to Sloman and Wride (2009) an oligopoly is ‘A market structure where there are few enough firms to enable barriers to be erected against the entry of new firms’ this relates to the proposition that only a handful of commercial airline alliances have a large proportion of total output in the market as determined by the concentration ratio, which is a measurement of competitive behaviour.

In the diagram below from the Bureau of Transportation Statistics, it can be seen to identify the five largest firms who have the largest share within the airline market. These include Delta airline, Southwest airline, American airlines, United airlines and US Airways. The top five airline alliances previously mentioned, in total account for 62% of all sales in the airline industry based on a 5-firm concentration ratio; whereas the other listed alliances make up the remaining sales. 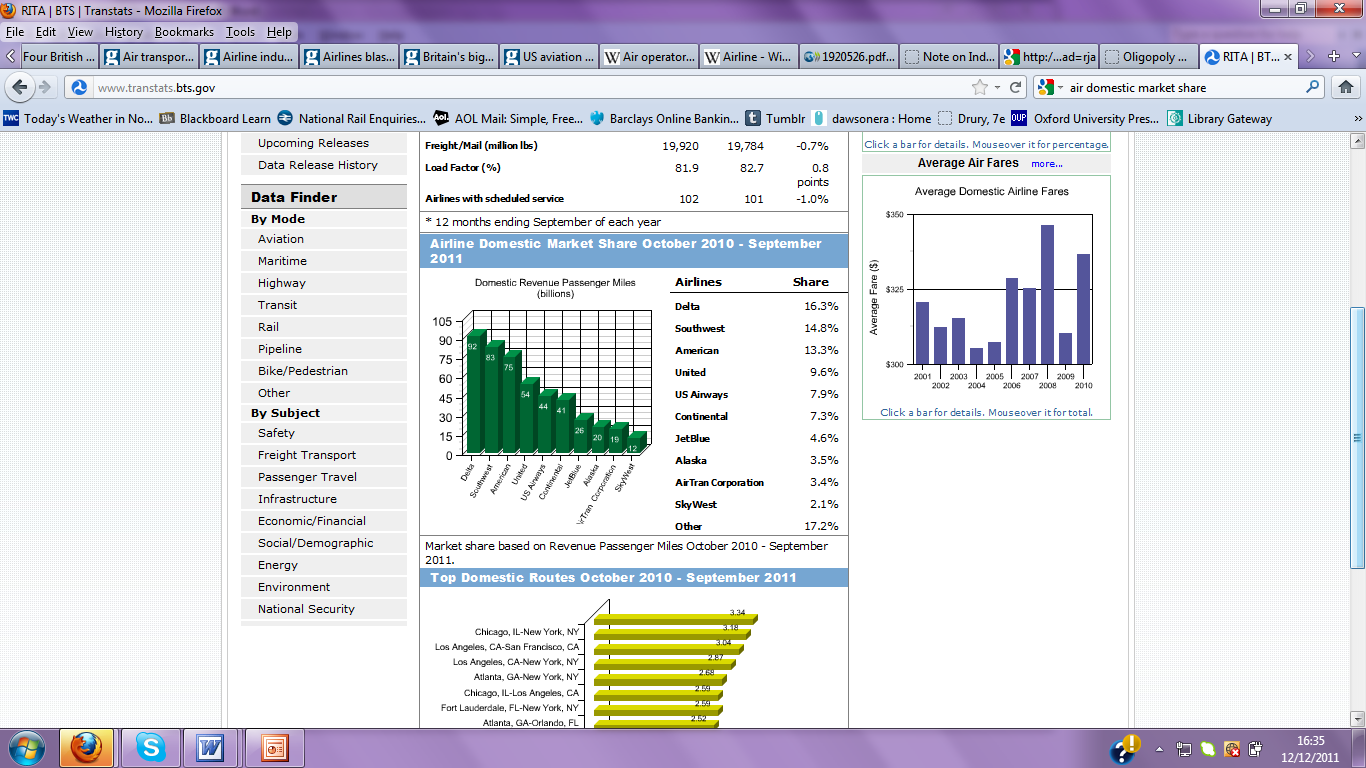 Within an oligopolistic market, it is important to understand that the nature of market entry barriers tend to be considerably high. By barriers to entry, it is understood that there are a lot of obstacles that deter new entrants from the coming into the market to compete with incumbent firms operating in the industry. Therefore, firms in the long run will continue to maintain supernormal profits, which is the above level of profit tied up in assets, related to the firm; consequently reducing potential firms from entering the market. This relates to the airline industry as the five alliances as stated in the above illustration with the largest market share will be able to keep their existing power over the airline business. Barriers to entry in the airline market include high set up costs, legal requirements, brand loyalty and economies of scale.

High operating costs are most notably one of the major barriers subject to entering the airline industry as these are necessary costs to a firm to start up an airline. The cost of aircrafts such as Boeing 747 tend to be a barrier because of the access to capital to fund the investment as they cost no less than £20 million; the costs of research and development can be integrated within aircraft cost; fuel is also an expensive commodity because of its scarcity. Experienced pilots and flight attendants tend to be costly due to the regularly need for them to be trained. Additionally insurance costs are expensive due to taking into account passengers, cost of fleet and also the price of a cost accountant to generate future projected figures which is required for approval of insurance with banks or capital investors.

Legal requirements act as a barrier within airline industry because it is vital that they comply with the legal legislations such as having the correct licenses required to manage an airline firm. Both internationally and in the United Kingdom, air operators such as Virgin Atlantic and British Airways must hold a valid operating license which enables them to carry passengers, cargo or mail for payment as stated by Civil Aviation Authority (CAA, 2011). Brand loyalty is a major restriction to potential entrants in the airline industry for instance, if customers feel loyalty through flier air mile loyalty schemes due to obtaining free upgrades and flights dependant on points earned then they will be less reluctant to go to a substitute airline even though their usual airline is more expensive because of built up loyalty. Additional barriers within the airline market are economies of scale (EOS), this is defined by Gillespie (2010) as ‘The reduction in the long-run average costs as the scale of production increases’ , in relation to airlines they make use of technical EOS by utilising online advanced reservation systems which enables airlines to reduce long-run average costs. Purchasing EOS will lower airline average costs through the bulk buying of aircrafts such as Boeing planes or fuel for the planes. Financial EOS will occur when established airline firms apply for capital from financial institutions to purchase passenger aircrafts, due to them being established they will obtain cost savings when they have borrowed money.  Last, managerial EOS will be present in the airline market because they are able to employ managerial specialists within there headquarters due to the size of the firms.

It is essential to recognise that a barrier to exit in the air transportation market is sunk costs, these are costs where they are not easily recoverable once a firm leaves a market, due to resources being specialised and not of use to any other sector. In reference, to the airline industry aircrafts subject to specialisation can be regarded as sunk costs because they are not easily transferrable to another use and therefore risk lost of capital investment by firms.

Oligopolistic characteristic which is not uncommon in the airline industry is the application of non price competition; this is where the airline operators use alternative methods to price in order to compete with existing firms. Even though airlines have interdependence and can influence the market over the price they charge, due to the uncertainty associated with competitiveness of pricing they tend to prefer to compete in the form of non-price competition. Non-price competition in the airline market consists of advertising and marketing techniques such as through use of brand websites, the quality of service offered which include offering free meals and alcoholic drinks on flights; these tactics are used to differentiate themselves amongst competitors. 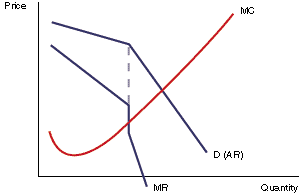 The diagram above illustrates that British Airways (BA) is producing at (P1,Q1). However, if BA decides to increase ticket prices above P1, other airlines in the market like KLM-Air France will not follow because they will be able to gain an advantage through the prospect of selling more of their tickets by attracting BA’s customers, suggesting that the demand curve before the kink is considerably elastic to an increase in price, thus if BA lowered their price then KLM-Air France will follow in order to not lose out on market share. This is not beneficially to the industry as it can lead to price wars and therefore result in firms losing profit. It is important to understand that at P1, price rigidity will be incurred as there will no incentive for airlines to either increase or decrease the ticket prices. (Bamford,2008)

The second characteristic that looks into the behaviour of firms is game theory, this is linked with interdependence of firms and can lead to tacit collusive action. An example of this occurring in air transportation was in 2007 when major airlines, British Airways and Virgin Atlantic decided to agree to an illegal cartel in 2004. The long haul passenger fuel surcharge (PFS) was first introduced, by fixing prices between August 2004 and January 2006. A Guardian news article (2010) explained ‘Senior BA executives "sidestepped the proper process" and colluded with Virgin Atlantic executives to secretly fix the price of fuel charges in an attempt to make hundreds of millions of pounds”. A press release by the Office of Fair Trading (2007) stated “British Airways has admitted that between August 2004 and January 2006, it colluded with Virgin Atlantic over the surcharges which were added to ticket prices in response to rising oil prices. Over that period, the surcharges rose from £5 to £60 per ticket for a typical BA or Virgin Atlantic long-haul return flight.” However due to Virgin Atlantic whistle blowing their part in the cartel, they were not fined by the Office of Fair Trading (OFT) for illegal practice; unlike BA who were forced to pay a £121.5 million in charges. Additionally, BA were issued a penalty charge of £148 million by the US Department of Justice, as stated by the Guardian (2007)

To conclude, the impact that an oligopoly structure has on an airline’s firm performance in the market is considerably large as it affects a number of elements such as pricing, as this essay stated earlier the risk of price wars and tacit collusion will only make the industry more competitive and result in reduction of profits caused by illegal behaviour as seen by British Airways during 2007. In addition, barrier to entry within the airline market caused by high set up costs have proven that new entrants will be less likely to enter the industry due to unhealthy competition caused by them not being able to compete with the top firms based on brand loyalty, brand image and profits.