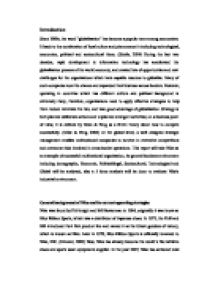 Introduction Since 1980s, the word "globalization" has become a popular term among economists. It leads to the combination of local culture and phenomenon's including technological, economics, political and sociocultural force. (Sheila, 2004) During the last two decades, rapid development in information technology has accelerated the globalization process of the world economy, and created lots of opportunities and new challenges for the organizations which have capable resource to globalize. Many of such companies took the chance and expanded their business across borders. However, operating in countries which has different culture and political background is extremely risky, therefore, organizations need to apply effective strategies to help them reduce minimize the risk, and take good advantage of globalization. Strategy is both planned deliberate actions and unplanned emergent activities; on a business point of view, it is defined by Mike & Peng as a firm's theory about how to compete successfully. (Mike & Peng, 2006) At the global level, a well designed strategic management enables multinational companies to survive in extensive competitions and overcome risks involved in cross-border operations. This report will take Nike as an example of successful multinational organization, its general business environment including demographic, Economic, Political/legal, Sociocultural, Technological and Global will be analyzed, also a 5 force analysis will be done to evaluate Nike's industrial environment. General background of Nike and its current operating strategies Nike was found by Phil knight and Bill Bowerman in 1964, originally it was know as Blue Ribbon Sports, which was a distributor of Japanese shoes. In 1972, the Phill and Bill introduced their first product line and named it as the Greek goddess of victory, which is known as Nike. ...read more.

Michael Jordan was the first celebrity athletes selected by the marketing team of Nike, start from 1984, Jordan's image are used on television and print ads of Nike, and a slogan of "be like Michael" was created to associate Jordan's success with Nike products. This campaign has effectively attracted Jordan supporters, and built up strong customer loyalty among them. However, during the last few years, Nike's brand image was affected by social problems, it suffered from ethical issues associated with its contract manufacturer hiring under age worker, bad working and safety condition and not paying minimum wage. People in the US started to use the term "Sweatshop" to describe companies like Nike and Gap who has working condition issues (Global exchange, 2007), in addition large Chain super markets such as Wal-mart and Target are also affected. These companies are forced to invest millions of dollars to launch an auditing process, design and set up standards and requirements for the suppliers to comply before they place orders with those manufacturers. The result of adding this extra process is extra cost that produces $0 return, also the time delay before they can place order and that decreases efficiency between supplier and buyer. However, although the manufacturer's working condition and labor policy seems dose not have much to do with Nike, but the effort of adding auditing process will positively help the suppliers to change their working condition and build up the mind of human rights. Technology For most of the industries, perhaps the information technology is the biggest factor which brought revolution to the way people do business. Internet has provided marketer a new thinking of direct selling to the end user of their products, and that is e-commerce. ...read more.

If the new entrant wants to become one of those firms, it has to start the business at a global level and invest huge funds on advertising and promotion. This means they have to bear the risk of all these investments being sink due to unsuccessful marketing strategy. Conclusion In this report, Nike's General Global environment is analyzed by looking at 6 aspects including demographic, economic, political and legal environment, sociocultural, technological and global. A few points from general environment should be addressed. Firstly, the appreciation of RMB has become a potential threat for Nike; However Nike's strong bargaining power over suppliers overcomes the problem. On the other hand, strong economic growth in china expands the potential market of Nike; marketing strategies should be taken to capture the expanding market share. Secondly, on the political aspect, the Chinese Export taxation policy has become a major threat of cost rising for Nike, switching a proportion of orders to other countries is recommended. Thirdly, Nike's auditing process can be treated as a strong effort of solving working condition related problems. Last but not the least, On-line selling base "Nike.com" and the unique NikeID product have become another competitive edge of NIKE. Moreover, after evaluating all the 5 force, it is found that Nike is on a very good position in its industrial environment. It has the strong bargaining power over its suppliers, and therefore it can maintain the current cost structure. Buyer's power is also low, so that buyers will not be able to increase their price easily. In addition, no close substitute is found to be threatening. Although the competition among existing rivals is extensive, there will not be big threat of new entrant taking away big proportion of market share. ...read more.