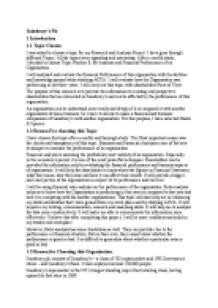 Analysis Project, I have to decide to make a financial and business comparison of Sainsburys with another organisation. For this purpose, I have selected Marks &amp; Spencer

﻿Sainsbury?s Plc 1 Introduction 1.1 Topic Chosen I was asked to choose a topic for my Research and Analysis Project. I have gone through different Topics. All the topics were appealing and interesting. After a careful study, I decided to choose Topic Number 8, the business and Financial Performance of an Organisation. I will analysed and evaluate the financial Performance of this organisation with the abilities and knowledge gained while studying ACCA. I will evaluate how the Organisation was performing in last three years. I will carry out this topic with shareholders Point of View. The purpose of this research is to provide the information to existing and perspective shareholders that are interested in Sainsbury?s and can be affected by the performance of this organisation. An organisation can be understand more easily and deeply if it is compared it with another organisation of same business. So I have to decide to make a financial and business comparison of Sainsbury?s with another organisation. For this purpose, I have selected Marks & Spencer 1.2 Reason For choosing this Topic I have chosen this topic after a careful and thorough study. The Most important reason was the clarity and transparency of this topic. Business and Financial Analysis is one of the best techniques to measure the performance of an organisation. Financial analysis is assessing the profitability and viability of an organisation. Especially in the recession?s period, it is one of the most powerful techniques. Shareholders can be provided the information only by evaluating the financial performance and business aspects of organisation. It will help the shareholder to know about the figures in Financial Statement, what they mean, how they arise and how it can affect their wealth. It will provide a bigger and clear picture of the organisation in respect of its performance and survival. I will be using financial ratio analysis on the performance of the organisation. ...read more.

Its gearing control shows a better managed picture of its finances and gives a better debt/equity of 0.47 as compared to the doubled (M&S: 0.92) average over the last three years, which shows that most of its funding was by short term debt finance. The company has better capital structure as compared to M&S at the moment, showing half of M&S’s total debt/ equity ratio and it demonstrates that the cost of capital is less in the form of interest but attractive signal for the investors to squeeze the more of its return and better control over the long run. The choice of capital is driven by the objectives and time duration for the projects. Sainsbury’s growth plan could prove more efficient by equity finance as compared to debt finance over the long run. The working capital management is a vital tool for any company to maintain its profitability and liquidity equilibrium. After a scoop of 11.3% profit, Sainsbury’s has shown a decreased cash level to £-77m as compared to £-2m in 2007. M&S has dropped itself into deficit after two positive cash for a continuous two years until 2008 to £-235.41. Sainsbury’s has arranged its cash from debt equity which can provide financial flexibility, speed up growth, maintain its balance sheet strength and invest in long term opportunities, bearing in mind that it is more riskier but under better management the cost could be of the same value, if the shareholder value is not ignored. D - MANAGEMENT EFFECTIVENESS. It’s an evaluation technique to judge the effective utilization of resources given to management. It can be measured normally from, Return on equity, Return on Assets, & Return on Investment Ratios. Lower ratio signals alarm for investors to reconsider their choice. SAINSBURY’S M&S Sainsbury’s policy of equity finance and short term debt finance has thrown it off the picture by M&S’s figures of Return on Equity: 39.01 as compared to its 7.06 (average over three years). ...read more.

4. Long-term prospects: J Sainsbury is now the third-largest food retailer in the U.K. after Tesco and Wal-Mart's Asda, and its market share of more than 16% is the group's highest in nearly a decade. The general merchandise, online grocery, and convenience-store divisions have potential and could be areas for growth. However, without having any clear sustainable competitive edge and with the economy expected to contract during the next few years, improving margins and further returns on capital will be difficult. 5. Valuation: At a forward P/E of 11, I think Sainsbury is already trading around fair value and is a little bit more expensive than Tesco and Morrisons, both of which have a P/E of 10. However, Sainsbury looks cheaper, trading at only 1.1 times tangible book value and 0.3 times sales. Plus, according to the company, the market value of its properties could be more than 2 billion pounds greater than their accounting value, which means the share may actually trade at a discount to tangible book value. My verdict on J Sainsbury Sainsbury's performance during the last few years has been promising, but I am skeptical as to whether the firm can maintain this trend. Margins and returns on capital have been improving but still remain low, and given that the business operates in a highly competitive industry, I would wait for a clearer indication of a sustainable competitive advantage -- that is, margins and returns on capital increasing further -- before buying in. Besides, Sainsbury's share price has risen 17% during the last two months and is already trading near its 52-week high. While a 5% yield remains attractive, I believe the company is now reasonably priced and, without sufficient margin of safety in my valuation sums, I would not be comfortable owning it given the issues mentioned. However, I would consider buying if the share price fell below 300 pence. So overall, I believe Sainsbury at 333 pence looks like a sell. ...read more.