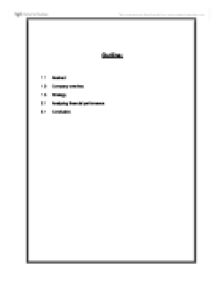 Outline: 1.1 Abstract. 1.2 Company overview. 1.3 Strategy. 2.1 Analyzing financial performance. 3.1 Conclusion. 1.1 Abstract. Our project is devoted to the theme of analyzing financial performance of Petrokazakhstan company. For the purpose of preparing this valuation, we have analyzed certain publicly available financial, operational and other information relating to company. Except as expressly described herein, our group has not conducted any independent investigations to verify the accuracy and completeness of such information. In preparing this project, we have reviewed and relied upon, among other things, the following items with respect to Petrokazakhstan: the audited financial statements, annual financial reports and certain publicly-available information related to the business, operations, financial performance and stock trading histories of Petrokazakhstan and other selected public upstream and integrated oil and natural gas companies operating internationally. We have conducted comparison of financial ratios of 2002 and 2003 years in order to understand relationships between components of the financial statements and to show how we can interpretate these data. 1.2 Company overview. The promotion of Kazakhstan began from the status of oil power. This begun when in 1899 there has hammered a first powerful fountain of oil. Chink was drilled in a natural boundary of Karachungul geographic area. After that in our territory it was open more than 250 oil fields and gas from which almost half is entered into commercial operation. KZ extracts more than 4 million tons of oil one year, thus volumes of extraction constantly growing. ...read more.

It should be supplemented with the other ratios listed below, however. The quick ratio is similar to the current ratio except that it excludes inventory, which is generally the least liquid current asset. A quick ratio of Petrokazakhstan is recommended, but as with the current ratio. Quick Ratio=(Cash+Short-term Securities+Receivables)/Current liabilities=(184660+150293)/168299=1.99 Quick Ratio=(Cash+Short-term Securities+Receivables)/Current liabilities=(74796+92431)/110369=1.52 Note: The Quick Ratio assumes that all assets are of equal liquidity. Receivables are one step closer to liquidity than inventory. However, sales are not complete until the money is in hand. The cash ratio measures the extent to which a corporation or other entity can quickly liquidate assets and cover short-term liabilities, and therefore is of interest to short-term creditors. Cash Ratio=(Cash+Short-term Securities)/Current liabilities=184660/168299=1.1 Cash Ratio=(Cash+Short-term Securities)/Current liabilities=74796/110369=0.68 Note: The Cash Ratio only tests short-term liquidity in terms of cash and short-term securities. Now lets calculate interval measure ratio.This is another measure of liquidity. It looks at the number of days that liquid assets (for example, inventory) could service daily operating expenses (including salaries). Interval Measure=(Cash+Short Term Securities+Receivables)/Average Expenditure from operations=(184660+150293)/(560072/365)=218.2 Interval Measure=(Cash+Short Term Securities+Receivables)/Average Expenditure from operations=(74796+92431)/(507997/365)=120.15 Profitabilty ratios: The objective of profitability relates to a company`s ability to earn a satisfactory income so that investors and stochholders will continue to provide capital to it. A company`s profitability is also closely linked to its liquidity because earnings ultimately produce cash flow. That is why, evaluating profitability is important to both investors and creditors. ...read more.