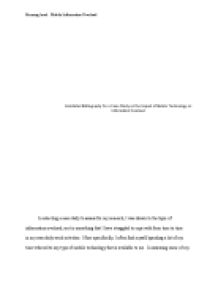 ﻿Running head: Mobile Information Overload Annotated Bibliography for a Case Study on the Impact of Mobile Technology on Information Overload In selecting a case study to assess for my research, I was drawn to the topic of information overload, as it is something that I have struggled to cope with from time to time in my own daily work activities. More specifically, I often find myself spending a lot of my time tethered to any type of mobile technology that is available to me. In assessing some of my own troubles dealing with always being on-call, or expected to return e-mails simply because I had been provided a Blackberry, I wanted to identify how some other organizations dealt with information overload specifically with mobile technology. I set out to identify how today?s managers ensure that their employees fully utilize the mobile technology they are provided, but also do not become over encumbered with the information provided by the same devices. In turn, I discovered a study that was conducted by two individuals from the University of Leeds in the United Kingdom on the West Yorkshire Police Force. This study focused specifically on the senior managers of the force, as the authors had determined that there was not an overwhelming amount of data specific to senior management?s experiences in both information overload and mobile technology. The West Yorkshire Police Force is one of the largest police forces in the United Kingdom, now employing over 9000 individuals in various roles (source on force). ...read more.

Many of the officers stated that they would keep other individuals ?in the loop? by including them on the cc: of a message. They felt that this would create an audit trail and ensure that there were not any gaps in the lines of communication (force 5). This issue presents two problems, with the first being that many of the individuals were receiving information that was not relevant to their role. This requires those officers to take time to read a message that was sent to them, just to determine at the conclusion that it was not relevant to them specifically. If you add the potential errors that could have been generated in the message due to the officer multitasking, an individual that would need the information in the message could be receiving incorrect information that could create potential issues at a later time. Another potential issue with multitasking is that is has been shown to lead to higher levels of stress hormones. A study conducted by Reuters identified that two-thirds of the study?s respondents believed that multitasking lessened their job satisfaction and damaged their personal relationships. It was also apparent in this study that the police force had no strategy on how to cope with the usage of these devices outside of work hours, other than each individual developing their own personal strategies on device usage. Most officers would just develop their own times for responding to messages based on their own after-work habits. Some would just turn the device off at certain times, while others felt that they could spread out the pressure of the work day by answering messages during their downtime (force, 6). ...read more.

Information research, 10(2), 227-242. Retrieved from http://informationr.net/ir/10-2/paper227.html This article provides information on how the West Yorkshire Police Force and how their senior managers equipped with Blackberry phones dealt with information overload. The authors conducted extensive research into the topic, gathering 48 articles and publications that were cited throughout their 13 page study. Dr. Allen is currently a professor at the Leeds University Business School and he holds a PhD in Information Management for Sheffield University in the UK. He is also a founder member of the UKAIS Northern Group and a founder member of the Research Network for Mobile Interaction & Pervasive Social Devices. His experience in mobile interactions really provided Dean, D., & Webb, C. (2011). Recovering from information overload. Mckinsey Quarterly, (1), 80-88. The article on recovering from information overload provided some insight on how managers can deal with the burdons of mobile technology. It also provides some supplemental information that complements some of the findings within the case study quite well. The article highlights three key tacticts that can be used to overcome information overload. Mr. Dean and Ms. Webb have written numerous articles dealing with the management realm, although this was their first dealings specifically with information overload. Mr. Dean received his MBA from Stanford University and was the director of Mckinsey & Company, who publishes the scholarly journal Mckinsey Quarterly. Joley, A., & Maret, P. (2010). Between social awareness and productivity: results of a survey about real time microblogging. First monday, 15(11), Retrieved from http://www.firstmonday.org/htbin/cgiwrap/bin/ojs/index.php/fm/article/view/3125/2645 This article deals with the aspects of microblogging sites like Twitter and their effect on information overload. The article surveyed 256 users of microblogs and used the results to identify opportunities to reduce information overload. ...read more.