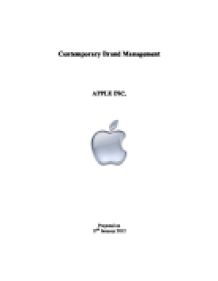 Contemporary Brand Management APPLE INC. Prepared on 17th January 2012 Context 1.0 Terms of reference 2.0 The Brand 2.1 Introduction of Apple 2.2 Brands 3.0 Brand Positioning 3.1 Analysing Brand Positioning 3.2 Apple Positioning Statement 4.0 Brand Analysis 5.0 Special Interest 6.0 Brand Management Recommendation 7.0 Bibliography 8.0 Appendix 1.0 Terms of reference This report identifies a successful brand and the characteristics which make it prosperous. It also distinguishes between a company and a product while critically analysing a range of theoretical concepts to evaluate the brands within the Apple Inc. Company and its consumer relationships. This report also contains an idea on how to enhance Apple's consumer image with theoretical back up. 2.0 The Brand 2.1 Introduction of Apple Apple Inc. formally known as Apple Computers inc. is an American based, Multinational Corporation established on April 1, 1976 that creates and sells numerous product core which are recognisable to consumers Apple's product timeline (Appendix One), these include, Mac, iPhone, iPad, iPod, iLife, iWork and iTunes. This company which was co founded by Steve Wozniak, Ronald Wayne and the most known, however unfortunately recently deceased on the 5th October 2011(2011-10-05), Steve Jobs has grown globally with over 350 retail stores in ten countries. Apple is the largest technology company in the world by revenue and profit with over 46,600 permanent full-time employees and 2,800 temporary full-time employees worldwide. Between the years 1976 - 1998 Apple was in the market but its real success started in the late 1990s with its introduction of the new all-in-one computer called the iMac. ...read more.

our (brand) is (concept) that (point of difference/benefit.)"(Rosenbaum-Elliot, Percy & Pervan, 2011) was chosen because it is a central positioning strategy which is mainly used by market leaders. Apple has demonstrated its superiority with boastful statements including, "It's the most amazing iPhone yet" (Apple, 2012) which is why a model that communicates the utmost benefit has been chosen. Although it can be hard to summarize a brand's characteristics into one sentence Apple's outgoing, straight to the point attitude would be more suited to Percy's positioning model. Apple's competition is difficult to pin down because in the past years it would be argued that as a PC manufacturer Apple would be rivalling companies such as Dell. Dell's brand positioning appears to be a differential strategy focusing on its USP that you obtain the computer "Direct from Dell." (Dell et al, 1999) This differs from Apple because Dell focuses its marketing on people who specifically are in want or need of a computer spending limited time and energy on those who are not interested. Apple uses a different technique by having a broader target market advertising that their product is for everyone and anyone. "Everyone should have a notebook this advanced. And now everyone can." (Apple, 2012) Although Apple's target market is larger both companies are successful for the reason that they both use their main attribute, reassurance of quality. This psychological acquisition has been obtained through the alleged added value created from good experiences consumers have encountered throughout the years they have been trading. ...read more.

Disadvantages of celebrity endorsement are that they may create public controversies which would damage a brands image or the image change of the celebrity may affect public recognition. Both of these statements seem to have no relevance to Beyonc� Knowles as she likes to keep her private life out of the public's view. The Source of Creditability Model suggest for a consumer to buy into the endorser the "trustworthiness" (Hovland et al, 1953) of the message and the source from whom it is conveyed by are considered sometimes unknowingly to the consumer (psychologically). Attractiveness and credibility of a celebrity appear to go hand in hand. The more attractive a celebrity the more appealing the brand becomes in most instances. This is based on the Source Attractiveness Model (McGuire, 1985) which has four dimensions; namely "familiarity" (knowledge of source through exposure), "likeability" (affection for source based on his/her physical appearance or behaviour), "similarity" (resemblance between the source and the audience), and "attractiveness." (McCracken 1989 p. 311) Attractiveness is something Beyonc� Knowles has, for the past five years alone she has been in the top twenty of the sexist females which is not an easy accomplishment. Celebrities are currently promoting Apple without any incentive but merely because they love the product, for example Oprah Winfrey stated "Words cannot describe what I feel for this magnificent, magnificent device," (Marsal, 2010) referring to the Apple iPad on her self-titled talk show. Winfrey had a great deal of influence over sales of products which shows that choosing the right celebrity can help increase sales figures. . 7. ...read more.