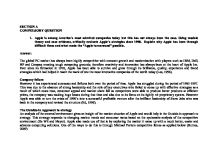 Apple is among Americas most admired companies today but this has not always been the case. Using module theory and case evidence, critically evaluate Apples strategies since 1990. Explain why Apple has been through difficult times and wh

SECTION A COMPULSORY QUESTION 1. Apple is among America's most admired companies today but this has not always been the case. Using module theory and case evidence, critically evaluate Apple's strategies since 1990. Explain why Apple has been through difficult times and what made the "Apple turnaround" possible. Answer: The global PC market has always been highly competitive with constant growth and modernization with players such as IBM, Dell, HP and Compaq creating tough competing grounds; therefore creativity and innovation has always been at the heart of Apple Inc. Ever since its formation in 1976, Apple has been able to survive and grow through its brilliance, quality, experience and brand strategies which had helped it reach the mark of one the most innovative companies of the world today (Lee, 1996). Company failure However it has experienced successes and failures both over the period of time. Apple has struggled during the period of 1985-1997. This was due to the absence of strong leadership and the role of key executives who failed to come up with effective strategies as a result of which costs rose, consumer appeal and market share fell as competitors were able to produce better products at efficient prices, the company was making huge losses during that time and also due to its focus on its tightly nit proprietary system. ...read more.

Alliances lead to increased core competencies It became partners with the best companies in the industry in order to utilize their facilities such as Warner brothers and Sony BMG for the iTunes and Google for the iPhone enhance its core competencies (Martin, 2010). Also it took over other music software, video creation and microprocessor companies such as Best Buy for direct retailing of its products. These partnerships made the company much stronger (David and Gary, 2004). Strategic leadership Leaders have the ability to turnaround the organizations and this is what Apple experienced when Steve Job joined it again. He was one of the greatest entrepreneurs who had clear vision and the power to get the best out of everything he did (O'Neal, 2008). His criticism and tight control of the organization and discipline made the company much more competitive. He took the right decisions at the right time and engaged everyone into the Apple experience. He came as a savior to the company at the time when it needed it the most. He restructured the board of directors and gave it a new vision. The company heavily relied on Job's leadership for its strategic management (Kohl, 2010). There was no one factor that led towards the success that Apple has gained today. ...read more.

Its competitive advantage is its brand value, high quality skilled labor force, Steve Jobs leadership, its successful and efficient supply chain, creative vision that is ingrained in the organizational culture of the company. Apple has able to gain cost advantage through its process technologies and designs and economies of scale as it sells the products all over the world. It has been able to differentiate much easily because its products are close to the consumer (Cynthia, 2004). The external environment if not directly but indirectly affects the company. The company has to be very cautious in its strategic management because the competition is high and any wrong decision can make them lose a large market share as consumers can easily switch to competitors who play an important role in the operating environment (Meyer et al, 2009). They need to maintain good relations with the suppliers and partners. Moreover, the intense external environment gives a stronger vision to the company to be more creative, dynamic and unique in their business model (Grant, 2010). Steve Jobs is a man with a creative master mind and therefore so far he has kept the entire dominant decision making in his own control as he understands the internal and external environment very well. His strategies are focused towards consumers convenience and providing them with easy to use products which at the same time gives them quality, style and satisfaction. ...read more.