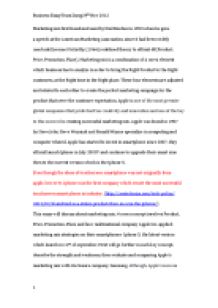 Apple marketing for the Iphone 5.

﻿Business EssayTram Dang29th Nov 2012 Marketing mix first found and used by Neil Borden in 1953 when he gave a speech at the American Marketing Association, since it had been widely used until Jerome McCarthy (1964) redefined theory to official 4P(Product, Price, Promotion, Place). Marketing mix is a combination of 4 cores element which business has to analyze in order to bring the Right Product to the Right customers, at the Right time in the Right place. These four elements are adjusted and related to each other to create the perfect marketing campaign for the product that serve the customer expectation. Apple is one of the most premier global companies that pride itself on creativity and innovation and one of the key to this succeed is creating successful marketing mix. Apple was found in 1957 by Steve Jobs, Steve Wozniak and Ronald Wayne specialize in computing and computer related. Apple has started to invest in smartphone since 2007, they official launch Iphone in July 20007 and continue to upgrade their smart sine then to the current version which is the Iphone 5. Even though the ideas of touchscreen smartphone was not originally from apple, however, Iphone was the first company which create the most successful touchscreen smart phone in industry. (http://arstechnica.com/tech-policy/2012/02/if-android-is-a-stolen-product-then-so-was-the-iphone/) ...read more.

There are also extra memory card offer in Samsung galaxy so customer can increase the capacity himself or herself while Apple use Capacity as a price strategy. This makes a big competitive advantage for Samsung win over Apple in sale revenue. Another weakness in Apple Iphone is non removable battery, Samsung offer customer a removable battery which they can change the battery when the current one is run out without carrying the charger around as Iphone 5. Another issue on Iphone battery charger is apple changes the connector so it is not compactible with other Apple product such as Ipad, Ipod , somehow create inconvenient to customers as they have to carry different charger around. The second concept I will discuss is Price. Apple, obviously using price skimming price strategy on their product and Iphone also the case. Apple charges user bases on their brand and capacity, i.e. the larger capacity the higher price, 16GB is £529, 32GB is £599 and 64GB is £699. Microsoft CEO Steve Ballmer in the interview with LinkedIn founder Reid Hoffman mentioned that Iphone price is too expensive and in fact, costumer has to spend approximately £800 to £900 for a Iphone and its accessorize such as headphone, sound dock, extra charger, etc. ...read more.

The final concept that I will discuss is Place factor. One significant strength about Apple in Place factor is they set their Apple store located in mostly big city where high footfall. Apple now has 390 stores worldwide and planning to open about 30 to 35 new stores in fiscal year 2013. Apple mainly open in the central city where accessible is high and supported by transportation. Even the Apple?s late CEO Steve Jobs claims during the last keynote held in San Francisco in 2011 one of the reasons of being on top is the powerful network of retail stores they have around the world (Jobs 2011). Apple also offers purchase online and home delivery worldwide as it accomplished through online stores, retail stores, direct sales and third parties such Carphone Warehouse, Phones4u. Despite the fact of having strong network store, Apple also struggle because of the weak network in Africa countries and we barely see any Apple store in Africa on the Map. Apple also differentiate themselves with other company store by the size of the store and the signature design as they apply simple but efficient store design which Apple offer table and chair for customers when they come to experience and purchase Apple product. Apple service provides certified technicians, who complete regular Apple training and assessments, and offer repair services, and exclusive access to genuine Apple parts. http://9to5mac.com/2012/11/15/microsoft-ceo-ballmer-still-thinks-iphones-are-too-expensive-opens-door-to-microsoft-doing-their-own-phone/ ...read more.