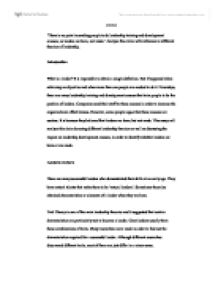 ARE LEADERS BORN OR MADE

'There is no point in sending people to do leadership training and development courses, as leaders are born, not made.' Analyse this claim with reference to different theories of leadership. Introduction What is a leader? It is impossible to obtain a single definition. But it happened when achieving an objective and when more than one people are needed to do it. Nowadays, there are many leadership training and development courses that train people to be the position of leaders. Companies send their staff to these courses in order to increase the organizational effectiveness. However, some people argue that these courses are useless. It is because they believed that leaders are born, but not made. This essay will analyse this claim by using different leadership theories as well as discussing the impact on leadership development courses, in order to identify whether leaders are born or are made. Leaders are born There are many successful leaders who demonstrated their skills at an early age. They have natural talents that make them to be 'natural leaders'. Sometimes they also obtained characteristics or elements of a leader when they are born. Trait Theory is one of the main leadership theories and it suggested that certain characteristics are particularly suit to become a leader. ...read more.

Leaders are made Furthermore, there are also many leadership theories that support leaders can be made. According to the Behavioural Theory, leaders can be made rather than are born. The theory focused on what leaders actually do instead of seeking their inborn traits. For instance, what should a leader do if their group got lost in a mountain while hiking? The theory suggested that leaders usually have similar reactions to different problems; therefore, people can learn to have suitable reactions in certain situations in order to be a leader. That is, clam down first in the example stated before. This theory suggested that successful leadership is based in learnable or definable behaviour. Another theory, Role Theory, assumed that people, no matter leader or fellows, usually define roles for themselves and others and which are based on social learning and reading. They will form expectations about the roles that everyone will play and act within the roles they adopt. People have internal schemas about leadership roles based on what they read from books, watched from television programmes, or being taught in training courses. Leaders should learn to define their leadership role in different situations. For examples, should the leader act as executive that determines the objective of the group or act participator that leaves the full delegation of decision to the team? ...read more.

However, the most successful and effective leader contain suitable leader traits, including intelligent, creative, fluent in speaking and talkative, organized, persuasive, decisive etc. and better be tall, handsome, healthy, male. He also contain acquired skills include the skill he need related to the group background, and suitable and effective leading approach. Lance Secretan (1986)7 stated that leadership is largely an acquired skill. He wrote that a leader needs intelligence, a positive attitude, and a combination of the qualities of courage, shrewdness and common sense. Successful leaders as they gain experience build on these natural talents and develop the wide range of skills they need. Leadership training and development courses could make people with certain suitable traits to be a more effective and successful leader. However, if people do not have any characteristic of a leader, leadership training and development courses might be useless to them. Reference 1: Stogdill, R.M.(1984), 'Personal Factors Associated with Leadership: A Survey of the Literature', Journal of Psychology. 2: McCall, M.W. Jr. and Lombardo, M.M. (1983). 'Off the track: Why and how successful executives get derailed. Greenboro, NC: Centre for Creative Leadership. 3: Bass, Bernard M.(1990), ' Bass & Stogdill's handbook of leadership: theory, research, and managerial applications.' 4: Wall Street Journal(1986), 'The Corporate Woman: A Special report' 5: Adair, John(1983), 'Effective Leadership' 6: Fiedler, F.E.(1967), 'A theory of leadership effectiveness, NY: McGraw-Hill' 7: Secretan, Lance(1986), 'Managerial Moxie, London, Kogan Page. 615154 ...read more.