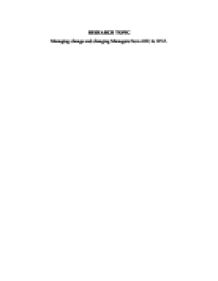 Article analysis Burnes, Bernard. &quot;Managing change and changing managers from ABC to XYZ.&quot; The Journal of Management Development. 22. no. 7 (2003): 627.

RESEARCH TOPIC Managing change and changing Managers from ABC to XYZ. Introduction and Overview of Article Companies have to embrace change either in technology, processes, structure or managing style in order to stay current and competitive in the current climate. However, as Salerno and Brock (2008) put it, change only becomes a reality within a business or organisation when its individual members commit and carry out the new initiative, accommodate the new structure, follow the new system, or turn out the new product. In order for individual members to make changes to their actions and behaviours, change projects have to be led by managers who have the necessary attributes to influence and to implement the projects. The following article argues that the alignment of managerial development and organisational change as parallel and linked activities could create good leaders and increase their competitiveness. This assessment is tasked to show whether argument is valid. Article Burnes, Bernard. "Managing change and changing managers from ABC to XYZ." ...read more.

Data was collected in the form observation of meetings, structured and semi-structured interviews with senior, middle and shop floor staff. For ABC company, the author serves as an adviser and considered it as a case study mode while for XYZ company; the author took on a participatory action research mode (Denzin and Lincoln, 1998). The author provided an accurate assessment based his role of as an adviser to both companies for their planned organisational change. However, it is also his role as an engaged adviser which caused the case studies to be biased towards XYZ company. Analysis, Significance of the findings The article illustrated the importance of having good leadership in implementing organisational changes and argues that managers can hone their management skills through participation in organisational changes. It suggested that since it is beneficial for both the organisation and manager, both activities should be aligned. The case studies provided further proved that without good leadership, large scale, radical organisational changes is not possible. ...read more.

Stewart (1996) explained that changing an organization towards some ideal form cannot be achieved overnight. Most OD programs are over 12 months in length and an average would lie somewhere between three to five years. As such, it will take a long time for organisations to measure and know whether the management development program is successful. Although it is agreed that organisations can coincide organisational changes with management development exercises, the changes to be implemented should not be on a large scale to minimize the risks exposed by the organization in the event the managers could not perform up to par. For radical and large scale changes, Potts and LaMarsh (2004) stated that organisations require teams of change agents, not just individuals. These teams need to be assembled and given charters and job descriptions that clearly set out their roles early in the change project so that they can operate effectively to make the change successful. Instead, management development projects can be centered around results-driven programs (Schaffer and Thomson 1998) which rely on incremental approach to change. Result-driven improvements require minimal investment and there is no excuse for postponing actions and results can be measured within a shorter time frame. ...read more.