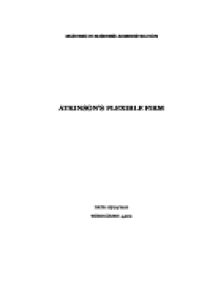 MASTERS IN BUSINESS ADMINISTRATION ATKINSON'S FLEXIBLE FIRM DATE: 18/01/2012 WORD COUNT: 4,020 TABLE OF CONTENTS INTRODUCTION 3 LITERATURE REVIEW 6 APPLICATION 14 CONCLUSION 18 REFERENCES 19 INTRODUCTION Atkinson's flexible firm model (1984) sparked widespread debate around the flexible firm and Britain's changing views towards flexible employment practices. Atkinson's controversial report was issued around a time of economic uncertainty, when Britain was emerging from what was considered to be a double recession. Following this turbulent period firms were prompted to take a new approach to organizational structure, strategy and employment practices (Skorstad et al, 2009) It may be considered that Britain's current economic situation is analogous to that of the early 80's. However, it may also be argued that the current economic recession is at an opposing spectrum to that of the early 80's and paradoxically could be considered to follow global economic trend rather than the domestic situation. This paper is intended to look at the relevance of Atkinson's flexible firm model within organisations given the current fiscal constraints. The author will critically review aspects of the model and complete a review of employment practices within the author's organisation, discussing the relevance of Atkinson's model to the constantly changing working environment. Marchinton notes the most appropriate word to capture how Britain perceives the changes that are occurring in the labour market is 'flexibility' (Marchington et al 1998, p.229). During difficult times of economic recession businesses that have failed to adopt a flexible approach will arguably fail. Turbulent market conditions inherently bring fluctuations in customer requirements and cautious investment suggesting demand on HRM within organisations will likely follow a similar pattern, which may or may not be predictable. During fluctuating market conditions it is important to retain talent which is critical to the success of many firms. Pollert (1991) suggests progressive firms perceive flexibility as a strategy to employ and retain the greatest talent critical to the operation of the firm. ...read more.

Notably few firms have adopted the complete flexible firm framework in Britain due to widespread criticism of the feasibility of the flexible firm model (Beardwell et al, 2004, p.145). Many years after the introduction of Atkinson model Marchington et al (1998) note that although firms have become more flexible in their approach to their employment practices, "their disaggregation of the workforce does not conform very closely to Atkinsons model" (Marchington et al, 1998). Also highlighting that 'most of the evidence suggests that employers decisions about the type of employment to offer tends to be made in an ad hoc manner, and casts doubts over whether employers have adopted clearly defined strategies' (Marchington et al, 1998, p.231). Marchington (1998) implies there has been a change in flexible employment practices following the release of Atkinson's model, remarking the commitment to flexibility since the mid 1980's has had an important influence on the UK's employment policies (Marchington et al, 1998, p.230). However, they also note that growth in part time work was at its greatest in the 1960's and early 1970's which saw an increase in part time work from 9% to 16%. Additionally the increase in temporary workers from 1984 to 1991 was slight at around 5%. Arguably highlighting firms had identified this as a means of numerical flexibility prior to the publication of Atkinson's model. Since 1992 however, there has been a significant increase in temporary workers Marchington et al (1998) suggests in the order of 30% up to 1996. The continued growth in temporary workers has prompted the government to make changes to legislation with the Flexible working regulation which came into force in April 2003. Within the first year almost one million parents requested flexible working. (Croucher, 2006, p.108). A report issued by the Trade and Industry Committee (2005, p.108) suggests that flexible working increases levels of productivity and increases staff retention. The report also recommends that flexible working requests are kept as informal as possible in order to reduce the cost on employers, arguably advocating the use of a psychological contact. ...read more.

(Beardwell et al, 2004, p.520). Post stability and success endangers a paternalistic culture for staff where there was a perceived 'job for life' (Marchington et al, 1998). CONCLUSION Flexibility within the workforce is as important in the current climate as it was in the 1980's. In order to react to changing markets and uncertain futures firms have little choice but to adopt flexible working practices which has remained since and prior to Atkinson's model. Flexibility at least in the context of Atkinson's model does not hold the key to success unless a clear understanding of how and where to deploy flexibility is established. Atkinson's model as suggested by Pollert (1991) is ambiguous and makes assumptions also noted by Marchington et al. (1998) earlier in this paper. Atkinson's model also discounts important factors such as scale and cultures and sub-cultures within the organisation. In order to improve efficiency companies look to reduce the number of single skilled employees and move to multi skilled workers. With more multi skilled workers it may be argued the ratio of core and periphery workers has changed with companies using multi-skilling as a facet of flexibility rather than numerical flexibility per se, however this approach may be more prominent with small and medium sized organisation. In order to effectively manage the flexible workforce it is important that a positive psychological contact is established. Simply reducing the size of the workforce does not result in increased profitability. Atkinson's model captures what was occurring out of the recession in the early 80's which has many synergies with the current recession although as suggested by Legge (1996) and Pollert (1991) may just be an analysis of what is occurring at the time defining what is happening rather than what should happen. The model has some relevance in today's fiscal conditions however as confirmed by Pollert (1991) may not be a tool for analysing change. As suggested by Marchington et al (1998) the employment practices of many firms may not conform to Atkinson's model, confirmed by Beardwell et al (2004) who remarks few firms have adopted the complete flexible framework. ...read more.