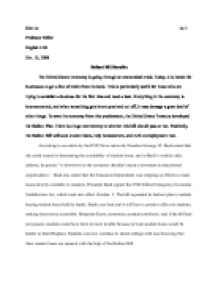 Bailout Plan. The United States economy is going through an economical crisis. Today, it is harder for businesses to get a line of credit from the bank.

Kiet Le Le 1 Professor Miller English 1101 Oct. 15, 2008 Bailout Bill Benefits The United States' economy is going through an economical crisis. Today, it is harder for businesses to get a line of credit from the bank. This is particularly awful for those who are trying to establish a business for the first time and need a loan. Everything in the economy is interconnected, and when something gets interrupted and cut off, it may damage a great deal of other things. To save the economy from this predicament, the United States Treasury developed the Bailout Plan. There is a huge controversy to whether this bill should pass or not. Positively, the Bailout Bill will save student loans, help homeowners, and curb unemployment rate. According to an article by the FOX News network, President George W. ...read more.

The purpose is to lower the payments to an amount that homeowners can pay them consistently. Organizations similar to the National Association of Realtors are pleased with the legislation for helping individual homeowners by minimizing foreclosures which help stabilize the housing market. Lawrence Yun, chief economist of the National Association of Realtors asserts, "Now there is an ability to hopefully quickly modify loans that people are having trouble paying and that will lessen the foreclosures" (Bahney). Changes may include lengthening the loan, reducing interest rates or writing down some principal. This is a huge advantage for homeowners since the Bailout Bill gave them an opportunity to modify their mortgages in a way that suits them. Last but not least, the jobs situation already looked uninviting before the recent financial meltdown, and some expect that it will get worse. ...read more.

A successful bailout could help keep the unemployment rate Le 3 below eight percent for the next year" (Coombes and Mantell). This is a tremendous benefit for the 800,000 laid-off U.S. workers. Through the Bailout Plan, they are now capable of supporting themselves and their families. Many felt that their money should not be used to rescue "greedy bankers". However, many others also felt that they should "at least" do something to pull them out from this financial turmoil, instead of using more time figuring out a better plan while conditions worsen. The Bailout Bill needs to take effect in order to help the United States take a path away from this financial burden. In doing so, the Bailout Bill will assist students in obtaining loans, help homeowners modify their mortgages, and curb the unemployment rate. Amber Fetter points out that in an October 6 article in the San Francisco Chronicle titled, "After the bailout: What's next?" the article stated, "The only thing worse than having a bailout would be having no bailout at all. ...read more.