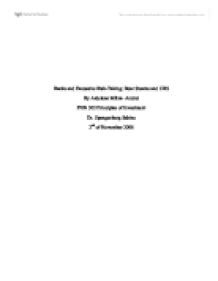 Banks and Excessive Risk-Taking: Bear Stearns and UBS By Ardelean Mihai- Andrei FNN 302 Principles of Investment Dr. Spangenberg Sabine 2nd of November 2008 The paper will use Bear Stearns as the main subject and UBS as its benchmark. Bear Stearns has in common with UBS the risk-taking and the fact that UBS benefited from high risk at one point. Bear Sterns was the first bank to fall in the US from the credit crunch after the UK's Northern Rock. The actual question is how the current situation reached this point and how risk became to be rewarded within the financial system? Some of the trades, in these banks, had no conceivable rationale other than to ramp up the risk to create the chance of instantly making a large profit. In order to understand how excessive risk-taking influenced these two banks, one of which had a free fall, there is a need to explain the situations that occurred, the economic condition, the bank's strategies and what exactly took action against them. UBS AG, mainly traded on the NYSE: UBS (New York Stock Exchange) as well as SWX: UBSN (Swiss Exchange) and TYO: 8657 (Tokyo Stock Exchange), is a large global financial services bank. UBS main headquarters are in Basel and Z�rich, Switzerland. The Swiss bank is the largest manager of private wealth assets in the world, 'the world's biggest manager of other people's money' (The Economist, 2007), as well as the second largest bank in the European community, from market capitalisation and profitability point of view. ...read more.

This rate of return is also called 'positive carry'. In cases when the credit market behaves in line with expectations, these strategies generate positive and consistent returns with modest deviations. This above explained strategy as well as others, works as long as markets and economic conditions are fairly stable. UBS, the largest bank in Switzerland, in May 2004 had record profits in its first quarter. At the time the net profit of the banks was 2.43 billion CHF, GBP 1.06 billion which is an amount double than the one reported in the same previous of the previous year, 2003. The risk taking paid off and the strategy the bank used was the one of proprietary trading which is capitalising on improving conditions of the market by taking additional risk in buying and selling stocks on the behalf of the bank. Returning to more recent periods, these strategies do not seem to work in a bearish market and especially when actual economic data do not meet expectations. By hedging it is impossible to hedge away the whole risk because the returns would then be too low. Consequently, the deception with these strategies is for the market to perform as expected and, if at all possible, to improve or remain stable. When the subprime debt problems arose the markets became everything but stable. To simplify the situation that occurred with Bear Stearns, the subprime mortgage backed securities market performed outside of portfolio managers' expectations, thus starting a chain of events which imploded the funds. ...read more.

David Gow's article (2008) points out the absence of risk management, the deficiency of operational limits and the imperfect risk control methodology on top of the lack of response to changing market conditions since the subprime crisis arose. UBS has 2.8 trillion dollars in assets, made a large 'bet' (Schwartz, 2008) on subprime mortgages. UBS's write downs were more than Citigroup, Merrill Lynch, or globally more than any other bank in April 2008. Dirk Hoffmann Becking, who is an analyst with Sanford Bernstein in London, mentioned that 'People now question UBS's ability to manage risk and judge just what a conservative investment is' (Litterick, 2008). At any point in time every trader may feel either pessimistic or optimistic. Most of the time, from corner to corner of the market as a whole, the traders' feelings are more or less cancelling one another out, otherwise too much of an imbalance is not created either way. However occasionally, such as in a credit crisis, sentiment spreads similar to a contagious disease. The wisdom of the crowds becomes more of the madness of the crowds. This is the moment when the risk is negatively rewarded because the situation occurs faster than the banks can actually escape the toxic debt. A wealthy, perfectly viable and healthy system may possibly exist with the overall levels of return being lower. But the current expectations demand taking on board risky positions, leverage, and the usage of complex financial instruments in order to satisfy demand for that high risk. ...read more.