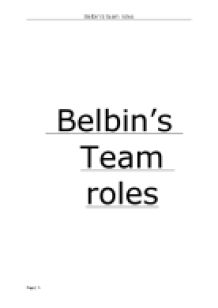 ﻿Belbin?s team roles ________________ Belbin?s Team roles Contents Page 1. Introduction 3 2. What is a team role 3 3. How did the concept originate? 3 4. Table of team, roles 4 5. Key elements of Belbin?s theory 5 6. How is it relevant? 5 7. Theories of group development 6 8. Conflict management 7 9. Leadership styles 8 10. Mary Brown case study 9 11. Conclusion 10 12. Bibliography 11 Introduction In this assignment I am going to analyse and evaluate the materials from the teamwork exercises which were carried out in the seminar. Using these materials I am going to review the impact of theory using john bowlby and Meredith Belbin in three different areas. These areas consist of theories of group development, conflict management, and leadership styles. Belbin?s theory, what is a team role? Meredith Belbin defines a team role as; ?A tendency to behave, contribute and interrelate with others in a particular way. Belbin team roles describe a pattern of behaviour that characterises one person?s behaviour in relationship to another in facilitating the progress of a team? Meredith Belbin. The value of Belbin team-role theory lies in enabling an individual or team to benefit from self-knowledge and adjust according to the demands being made by the external situation. How did the concept originate? During his research, Meredith found that each of the behaviours was essential in getting the team successfully from start to finish. His key was balance. For example, Meredith Belbin found that a team with no Plants struggled to come up with the initial spark of an idea with which to push forward. ...read more.

According to Tuckman and Jensen (1977), there are five stages of group development. The five stages are ?forming?, ?storming?, ?norming?, ?performing?, and ?adjourning?. Forming is when everyone is instructed to group together for a particular purpose and understand the task to be accomplished but there are sceptical between each other. This is the period of "testing-out" our group members. Storming is where some minor confrontations will arise that is quickly dealt with. These may relate to the work of the group itself or to responsibilities within the group. The conflict will be more or less suppressed, but it'll be there, under the surface and here is where leader is being chosen by everyone or subconsciously. Norming is they now understand each other better, can appreciate each other's skills. Individuals listen, support each other, and are prepared to change pre-conceived views. They feel they're part of a cohesive, effective group. Performing is the group can begin to get some work done on a relatively stable structure. Everyone knows each other well and can work together, trusts each other to allow independent activity. Adjourning is about completion and disengagement, both from the tasks and group members. Individuals will be proud of having achieved much and they reflect on what they've done, and consciously move on. (Knights & Willmott 2010, p91 Conflict management Within each and every society there will be a time when individuals will have different opinions; these differences may be due to the individual and collective reason. When opposing individuals or groups consciously attempt to abolish, ambush one another in order to get certain task, conflict comes into place. ...read more.

I believe we failed to come to a decision as there was lack of communication, and too much conflict within the group, also members of the group tried to put in a hierarchy status ranking according to each individuals roles ranging from the most and least important which did not help the situation. If the group had to carry out this again there are several issues that need to change in order for it to be successful. Firstly the group needs to communicate with one another listen and taking into account the view of everyone within the group as this also avoids conflict. Secondly group members should not overpower one another as it may make other members feel uncomfortable. Lastly group members need to respect each other and not talking or shouting when that person is putting their view across. Belbin?s theory is relevant as it helps ensure that essential team roles are covered, and potential weaknesses among the team member are addressed. By understanding my role in a team, I can manage my weaknesses, and so improve how my contribution to the team. Conclusion To conclude from studying teamwork, I have learnt the various different aspects which need to be considered when constructing a team such as size and roles and leadership. It?s reasonable that the potential of a group relies on their dexterity to work with one another. Group norms and communication have an immense contribution to teamwork. The more the group members like to work together the more the output will be affected positively. Henry Ford is quoted as saying ?Coming together is a beginning. Keeping together is progress. Working together is success.? (Harrell 2003, p. 198). ...read more.